A compact disc featuring 31 Latgallian stories told by various cultural activists and musicians has been published by the Latgolys Producentu Grupa.

The goal of the recording,  Latgalīšu puosokys i puorsokys, is to make the material more accessible, according to Edīte Husare of Latgolys Producentu Grupa. Copies of the CD will be distributed to libraries and schools in Latgale, as well as to several organizations.

The stories were gathered over several years by folklorist Iveta Dukaļska, who traveled around the eastern Latvian province of Latgale. Among the stories are “Par peļom i kači,” which is about a mouse’s plan to put a bell on a cat’s tail, and “Par vylkim i eņgeli,” which is about a hungry wolf and an angel.

The CD will not immediately be available for sale to the public, Husare told Latvians Online, but eventually copies will be found at the Istaba gallery in Rīga and possibly through the Internet store madeinlatgola.lv.

Preparation of the recording was supported by the State Culture Capital Foundation (Valsts Kultūrkapitāla fonds).

For more on Latgolys Producentu Grupa, visit the group’s page on the draugiem.lv social network. 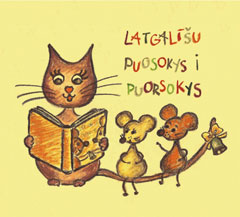 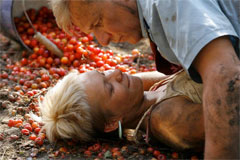 Guna Zariņa as Renāte and Rolands Zagorskis as the policeman Krasts are among the actors in the Andis Mizišs film Medības. (Publicity photo)

Emir Kusturica is a world-renowned Serb filmmaker who makes great surreal and absurdist films. Time of the Gypsies and Arizona Dream come to mind. Medības tries to traverse the same terrain, but unfortunately Andis Mizišs, the director of the film, is no Kusturica.

The elements are there, but somehow they never really come together into a cohesive story in which we care about either the characters or the outcome of their actions.

The film opens with a scene of two men making and bottling juice in a rundown former train station. A train pulls up. It’s the owner of the bottling operation stopping by to check on the progress. The train also serves as a home for unwed mothers and the bottling operation owner seems to be their matron. The men hadn’t been paid in a while and ask as to their wages. The owner gives them the runaround and instead presses them to finish the latest shipment. The train pulls away, one of the bottlers goes back in and out of spite adds some poison to a few of the bottles. The entire shipment is then delivered to a small country bar.

Elsewhere a trio of orienteering competitors gets lost in the woods; a hunting party, also on rails, sets out for their annual hunting party; a famous architect and his highly strung lover are working out some issues; and a local policeman is trying to keep his young partner awake at a railroad crossing.

Keeping track? All of these characters and stories of course will be intertwined and then stuff will happen or, as a friend of my commented, “and then it gets weird.”

Medības is not all bad. There are some good performances (Guna Zariņa’s Renāte the best among them) and the stories have potential, but it’s just that it never really comes together. It’s just a lot of exposition about really strange situations and the sometimes strange people who get trapped in them.

The title itself seems to be an allusion to the personal and emotional hunts we all engage in our daily lives. But there’s just too much of the strange here that is never really explained. It’s a strangeness overload and we are far too busy making up our own back stories for the characters to have any time to actually relate to them. Just starting with the train, is it really that easy and simple to operate your own train, maintain your own track? Doesn’t it cost money to operate a train and why put a home for unwed mothers on it and who would ever send or willingly find themselves on this one?

(Editor’s note: This review originally appeared on the author’s blog, Not Really a Blog, and is republished with permission.)

Latvian BMX cyclist Māris Štrombergs, who won a gold medal in the Beijing Olympics, has reclaimed his title as world champion in the sport.

Štrombergs finished nearly a half-second ahead of local favorite Sifiso Nhlapo in the July 31 final of the elite men’s BMX competition of the UCI BMX World Championships, which were held at Pietermaritzburg, South Africa. Štrombergs last held the title of world champion in 2008, the same year he won in the Olympics.

The 23-year-old Štrombergs finished the 385-meter course in a time of 38.391 seconds, according to results reported by the Union Cycliste International (UCI). Silver medalist Nhlapo was 0.487 seconds behind Štrombergs. The bronze medal went to Joris Daudet of France.

“The work you have invested, your great willpower and talent have allowed you the reach new heights in the BMX sport,” Zatlers told the cyclist, according to the president’s press office. “Thank you for letting the world know about Latvia through your outstanding performance and great victories.”

For his victory, Štrombergs will receive a cash prize of EUR 4,000 from the UCI.

Another Latvian, Kristers Lējiņš earned the silver medal in the junior men’s competition. He finished the course 1.012 seconds behind gold medal winner Sylvain Andre of France, who crossed the finish line in a time of 38.822 second.