The sklandrausis, a small, almost bite-sized pie made of rye flour with a filling of potatoes and carrots, has received a “Traditional Speciality Guaranteed” designation from the European Commission, according to the commission’s representative office in Rīga.

The designation “increases the market value of the products of economic operators, by guaranteeing that they are distinguishable from other similar products or foodstuffs,” according to the European Commission’s description.

The sklandrausis, described on one recipe website as a Latvian vegetable tart, earned the designation based on a December 2011 application (PDF, 1.1 MB) from the organization Zaļais novads from the Dundaga region.

The application explained the meaning of the word sklandrausis:

The word is a compound of skland- and rausis. The word rausis (“pie”) is derived from the verb raust (“to rake over or strew”). This suggests that the pies were baked in a primitive fashion, by raking hot hearth ash or oven coals over them. Sklanda is an ancient word derived from the Couronian language (proto-language of the ancestors of the modern-day Courlanders, inhabitants of western Latvia) which means “fence-post, wattle fence” or “slope, declivity”; in this case, it refers to the upturned edges of the pie’s crust (Karulis, K., Latviešu etimoloģijas vārdīca (“Etymological dictionary of the Latvian language”), Vol. II, 1992). There is a special type of fence in Courland known as a sklandu žogs.

While the sklandrausis is the first Latvian product to earn special designation, it may not be the last.

The Latvian Bakers Association (Latvijas Maiznieku biedrība) notes in its application (PDF, 1.0 MB) that the bread is distinct because of the way it is made: Hot water is poured onto the flour to make it sweet.

Meanwhile, an application for “Protected Geographical Indication” is pending for Carnikavas nēģi (Carnikava lampreys), according to the European Commission. The town of Carnikava boasts about its lampreys and even hosts an annual festival for the eel-like fish. 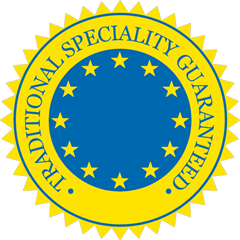