It seems choir music could never be forgotten in Latvia, as choir music, along with folk dancing, enjoys its peak of popularity every five years at the Latvian Song Festival, the last of which was in 2013. Besides bringing together more than 10,000 singers onto one stage, the entire year is spent in celebration of song, and allows for less well known choirs to have their moments in the spotlight.

One choir that shone particularly brightly during the 2013 Song Festival season was the women’s choir Balta, who were recognized as the best women’s choir during the traditional Koru kari competition that is always held the same year as the Song Festival. To celebrate this victory and their achievements, in 2014, the choir recorded its first solo CD, (somewhat unimaginatively) titled Latviešu kormūzika (Latvian Choral Music).

Balta, who were founded in 1999, have been, since their founding, led by conductor and artistic director Māra Marnauza (who also founded the respected chamber choir Fortius). In their 15 years, the choir has had much success in competitions all over Europe.

As they are a women’s choir, it should be no surprise that many of the songs are of a feminine nature and sung from a girl’s point of view.

According to the choir’s website, modern Latvian choir music is particularly significant to them, and this is reflected on the selections on the CD. Though there are some selections from the classic era of Latvian choir music, such as Pēteris Barisons’ ‘Melodijas’ and Jēkabs Graubiņš’ arrangement of ‘Es meitiņa kā smildziņa’, the bulk of the songs are from the modern era.

Composer Ilona Rupaine, who has made a name for herself with her arrangements of Latvian folksongs (witness another Song Festival favorite – the majestic and brilliant arrangement of ‘Saule bridu rudzu lauku’) is represented on this collection by her arrangement of the Latgallian folk song ‘Moseņ’ zeileit’ viesti nesa’, and this mystical song is performed with both mystery and grace by Balta.

One of the most popular compositions at the 2013 Song Festival was composer Ēriks Ešenvalds’ ‘Dvēseles dziesma’ (words by Anita Kārkliņa), and Balta provide their version of this song that extolls the beauty and uniqueness of the regions of Latvia. The original version of the song was for mixed choir, so it is interesting to hear this performed by a women’s choir instead, adding a new dimension to it. Still, though soloist Jānis Misiņš has a powerful voice, his performance is perhaps a bit too operatic, sounding slightly out of place on what is meant to be a tender and soft song about the beauties of Latvia.

The album concludes with composer Kārlis Lācis’ arrangement of the Latvian folk song ‘Es bij’ meita’. Lācis, known for his jazzy arrangements in a popular music style, brings equal measures of humor and playfulness to this song. The choir, defiantly singing about how a girl chooses to remain single for the time being (turning away all suitors – one too fat, one too skinny, one without teeth, and one with pants sagging due to women-chasing), appear at once equally charming and flirtatious. Both ‘Es bij’ meita’ and ‘Dvēseles dziesma’ also feature the nimble piano work of pianist Laimrota Kriumane, whose light touch adds to the charm of both of these performances.

The female choir genre in Latvia (much like the male choir genre) has long been underrepresented in Latvia, and it is a pleasure to have a women’s choir like Balta reconfirming that there is still much beauty and life in these songs. The choir Balta, under the able leadership of Māra Marnauza, have established themselves as one of the premiere women’s choirs in Latvia today. Latviešu kormūzika, covering both old and new, the traditional and the modern, confirm the multifaceted choir’s diversity and ability to shine, no matter the material. 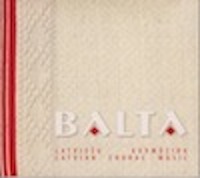