The wait is over. Companies from all around the world are releasing products that now include Latvian as a selectable language. And we’re not just talking Apple, Microsoft and other computer-related products, but everyday devices such as mobile telephones, digital cameras, MP3 players, home media players, pocket organizers, car navigation systems and even the latest blockbuster films.

For many years now we have been able to write in Latvian using Windows- and Macintosh-based computers. The introduction of the Unicode standard more than a decade ago has quashed the issue of incompatible operating and writing systems providing the ability for software developers to easily add foreign language support, including the Baltic languages, to their software products. We now have access to hundreds of Latvian language fonts (even for the Latgallian and Liv languages) as well as Latvian spelling and grammar checkers, thesauruses, dictionaries and other useful Latvian language tools. But it hasn’t stopped there. This same technology is now finding its way into home appliances and other must-have gadgets For the first time ever we are also seeing the Latvian language supported in these devices in all its glory—with all of the obligatory “mīkstinājumi“ and “garumzīmes“.

Nokia has been a pioneer is this area for many years. If you purchase a Nokia mobile telephone in Latvia it will most likely come preinstalled with the Latvian language and you will be provided with a Latvian version of the user’s manual. Nokia has also gone one step further and adapted its T9 predictive text technology for the Latvian language, allowing for fast and convenient texting in Latvian. Sony Ericsson is not far behind by also offering T9 for Latvian and there are even third party Web sites such as DaVinci Team that allow you to add Latvian language support irrespective of where the original handset was purchased. Another option for those who have purchased their mobile handset outside of the Baltics is to visit the Elkor Service Centre at Brīvības 201 in Rīga, where for a small fee your handset can be quickly converted to Latvian while you wait. But be warned, as this could void your existing warranty and may not work on all models.

As you navigate through your new Latvian-enabled mobile telephone you’ll come across terms such as “Izvēlne” (Menu),  “Īsziņas” (Text messages), “Iespējas” (Options),  “Režīmi”  (Settings) , “Palīgrīki” (Extras), “Paņemt” (Select),  “Zvanu arhīvs” (Call register), “Aktivizēt” (Activate) and others that will no doubt enhance your existing vocabulary. Since several Latvian and Polish firms have been involved in the Latvian language localisations for Nokia, Sony Ericsson, BenQ-Siemens, Motorola and Samsung, this has caused inconsistencies in translations. For example,  “Settings” is referred to as “Uzstādījumi” on Nokia phones, but “Iestatījumi” on other brand handsets.

Apple’s popular portable media player, the iPod, will perfectly display Latvian letters not only in the companion iTunes software, but on the actual iPod screen as well. Insert a new Latvian music compact disc and, after a brief query to an Internet-based music database, the track names and other details are retrieved with all the correct Latvian letters. Earlier versions of the iPod had some troubles and the accented letters would vanish altogether, for example, “ui, mana lgavia” (Čuči, mana līgaviņa), but that is now a thing of the past. Microsoft’s new Zune media player will no doubt also understand Latvian, but because Europeans won’t see this model until next year this has yet to be verified. Other media players such as the Squeezebox have also recently begun to correctly display Latvian letters on its large fluorescent display, so you can not only view what track is playing, but have live Latvian news streaming into your living room. Make sure that you have at least version 6.5 of the SlimServer software, otherwise question marks appear in place of accents, for example, “?u?i mani l?gavi?a (“Čuči, mana līgaviņa”) making it quite unreadable.

Olympus started an advertising campaign earlier in the year proclaiming its new digital cameras were the first to support the Latvian language. Both the navigational menus and image viewer software on the mju700, mju 810, mju 720SW, FE130 and FE140 models are available in Latvian. Around the same time the portable GPS car navigation system, TomTom Go, also became available. A male Latvian voice provides the friendly driving directions, and there is a interface and menus on the screen. The unit sells for about LVL 400.

Linux, which already has a significant share of the server market, is now making its way to the workstation as more organizations decide to migrate to OpenOffice.org, a free open-source alternative to Microsoft’s Office software. The Linux Centre at the University of Latvia together with the Latvian Open Source Association have developed Latvian-language support for the desktop (GNOME 2.14/2.16 and KDE) as well as a Latvian version of OpenOffice 2 with spellchecking. The software is available as a free download from their Web sites.

Even the animation blockbusters from Hollywood such as Šreks 2 (Shrek 2), Haizivs stāsts (Shark Tale),  Ledus laikmets 2: Atkusnis (Ice Age 2: Meltdown), Vāģi (Cars), Trauksme mežā (Open Season) and Aizskalotie (Flushed Away) are getting the Latvian treatment and are now professionally dubbed in Latvian using well known Latvian actors—no more monologue or dialogue as you may still encounter on Latvian television. The first such DVD, Ledus Laikmets 2: Atkusnis, fully dubbed in Latvian and with the additional option of Latvian subtitles, began appearing in stores last month.

I have not even broached the subject of application software such as the Latvian version of MS Office 2003, the Latvian hyphenation option in Adobe InDesign and many others, but the list grows on a regular basis. It is truly a pleasure to see that major companies from around the world are beginning to adapt their products for Latvians. I have started a dedicated blog called latviski.lv where you can also submit new Latvian-friendly products. 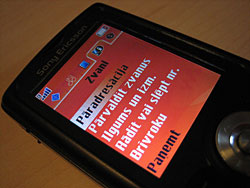 A Sony Ericsson W810i mobile telephone, modified to display Latvian language commands, is among an increasing number of hardware and software tools that are being Latvianized. (Photo by Andris Straumanis)

5 thoughts on “The digital world comes to Latvia”