The e-signature was officially introduced in Latvia more than 8 years ago (see Is Latvia ready for e-signatures?), but has remained stagnant for most of these years. Recent developments including the major redesign of the Latvija.lv government services portal as well as a recent video campaign featuring “Suitu sievas” (which has already gone viral in the social networks) to promote more than 200 e-services may be a sign that things are about to change.

My first experience with e-services about a month ago was totally unexpected. As a Latvian citizen currently residing in Australia I had to track down a bill which was supposedly mailed to a Riga address, but got lost in the process. Dreading the reaction that I would receive from ringing yet another bureaucrat at the Riga City Council I was instead greeted by a helpful person who not only provided all the necessary details, but also suggested that I go to e-pakalpojumi.lv to retrieve all future bills electronically. Hesitant at first, I decided to give it a go. Five minutes later I was already finalizing the payment of the bill on my computer many thousands of kilometers away from any of the Riga City Council offices.

If you are a Latvian citizen you may be curious as to what data is being held about you by the various government agencies. Go to Latvija.lv and search for “mani dati” (or click on the English version and search for “my data”) and choose from a host of databases including individual and passport details, property ownership, registered pets, outstanding fines as well as a list of application forms. Over a 100 more e-services will be introduced in the coming months. In order to access these services you will need to authenticate yourself within the system using your Latvian bank details or by using the eID (electronic ID card).

If you have had to renew your Latvian passport in recent years you would also have been offered the eID card. Estonians have had these cards for a number of years and being the size of a credit card they are a convenient alternative to carrying your passport when travelling within the EU or if you require further identification at various government institutions and service providers. 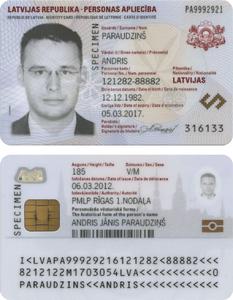 The eID also comes with 120 free e-signatures. What this means is that you can digitally sign a document from wherever in the world and avoid the hassles and expense of a notary lawyer. In practice however, it is still not quite there in the usability stakes. First off you will need a card reader. Secondly you need a Windows, Macintosh, or Unix computer to download the “eParakstītājs 3.0” software. Thirdly you will need to dig out both the PIN1 and PIN2 codes that were issued with your eID card. And lastly you need to ensure that the receiving party accepts a digitally signed document. A new virtual e-signature option has become available, but then you no longer need your eID card, as authentication occurs via your bank login details.

My eID card was issued nearly two years ago and the e-signature facility is about to expire in June. I am still trying to find out how to extend this, but I keep going around in circles when visiting the website.

With the relaunch of Latvija.lv and the Latvian Presidency of the Council of the EU highlighting e-government and e-Europe as a priority we should see more widespread adoption of the eID card. But we have some catching up to do: 90% of Estonia’s 1.3 million residents have active eID cards and they are already using their eID in new and innovative ways: as a national health insurance card, a pre-paid public transport ticket in Tallinn and Tartu, for digital document signing, internet voting that allows voters to cast their ballots from any internet-connected computer and for picking up e-prescriptions.