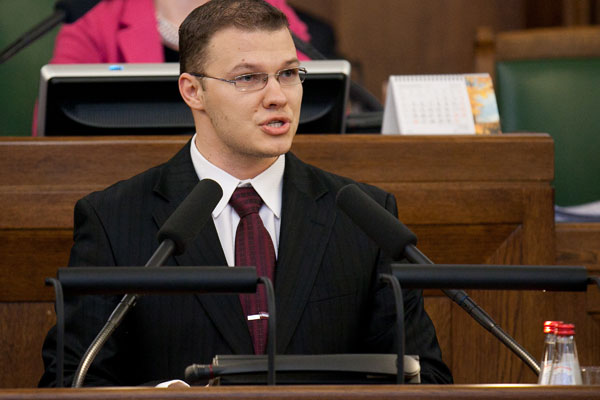 Raivis Dzintars of the right-wing National Alliance speaks against proposed legislation that would make Russian an official language of Latvia. The Saeima on Dec. 22 blocked the bill and the issue now will be decided in a national referendum. (Photo by Ernests Dinka, Chancellery of the Saeima)

As expected, the Saeima has rejected a bill that would amend Latvia’s constitution to make Russian an official state language.

The Dec. 22 vote was a formality, because regardless of the parliament’s decision the issue must now be put to a national referendum. One of the paragraphs the bill would change establishes Latvian as the state language, and that constitutional provision may only be amended through a referendum.

In a special session, the Saeima killed the bill on its first reading. Sixty MPs voted against sending the bill to committee, no one voted in favor, and one MP abstained. MPs from the largely ethnic Russian political party Harmony Centre (Saskaņas centrs) walked out of the meeting before the vote.

The legislation would change five paragraphs of the constitution, giving the Russian language equal status to Latvian. The bill has been pushed by the pro-Russian group Dzimtā valoda (Native Language), led by the controversial Vladimirs Lindermans. A citizen initiative held in November garnered 187,378 signatures in favor of the constitutional amendments, forcing the question before the Saeima.

After the Central Election Commission on Dec. 19 certified the results of the signature campaign, President Andris Bērziņš on Dec. 20 submitted the legislation to the parliament.

However, in a letter to Saeima Speaker Solvita Āboltiņa, the president pointed out that making Russian an official language would mean renouncing the core ideas that led to the founding of the Latvian state.

He added that the proposed legislation would not help unify Latvian society.

In the Saeima, Jānis Ādamsons of the center-left Harmony Centre spoke in favor of the bill, but concluded by announcing that his party would not participate in the “farce” of the vote. The more than 180,000 people who signed on to the initiative did so not because they are against Latvians or the Latvian language, Ādamsons said, but because they are opposed to the politics of the right wing.

“We are our country’s patriots,” Ādamsons said of Harmony Centre, according to a translation of the meeting’s transcript. “And we are concerned about Latvia’s future, because this is the land where our children and grandchildren will live. In the past 20 years, the right has allowed tens of mistakes in the areas of economics, finance and social issues. It will soon become clear that they have also allowed tens of mistakes in national politics.”

Ādamsons and the other Harmony Centre MPs then left the chamber.

Raivis Dzintars of the right-wing National Alliance (Nacionālā apvienība “Visu Latvijai!” – “Tēvzemei un Brīvībai/LNNK”) spoke against the bill, telling the remaining MPs that the legislation is an attack on the foundation of the Latvian state.

“In fact this spits in the face of those Latvians who already experienced 50 years of bilingualism, but without the opportunity to vote ‘No.’ In fact, with an aggressive campaign financed from abroad, an active struggle against Latvian statehood has been declared,” Dzintars said.

The Central Election Commission must now prepare the national referendum. According to media reports, the referendum may be set for Feb. 18.