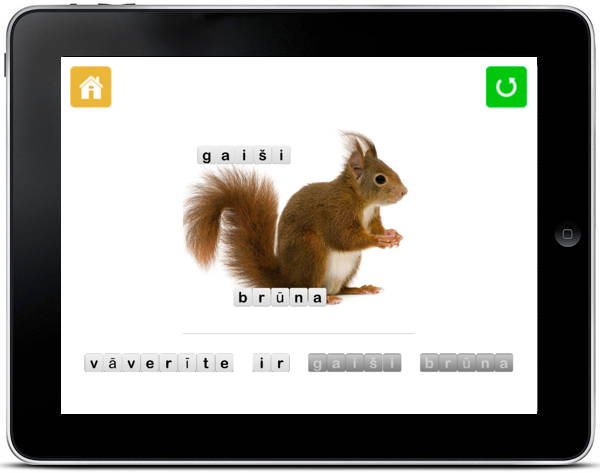 Even though Melbourne-based Latvian Saturday School “Daugavas skola” is located just around the corner from one of the largest Latvian libraries outside of Latvia it recently decided to invest in several iPads to explore new learning opportunities.

The iPad, roughly the size between a smartphone and a laptop computer, is becoming the preferred personal computing platform for the millennial generation – people born between 1980 and 2000.  The iPad has no mouse or a physical keyboard and like its smaller cousins, the iPhone and iPod touch, you interact with it entirely via the touch sensitive high resolution screen. Its audio visual capabilities and ease of use have also attracted the attention of universities, colleges and K-12 schools worldwide.

So when the school asked me to help set up their newly-acquired third generation iPads, my task was to discover what new and exciting Apps had become available and how this technology could be applied to the classroom – where Latvian grammar, literature, history, geography, culture and traditions are taught. After extensive browsing on the App Store (over 200,000 Apps are now available for the iPad) as well as perusing numerous Web sites and online forums this is what I found.

The uTalk series has been adapted for the Latvian language and uses a combination of images and audio for word practice. Three levels of exercises (easy game, easy game+ and hard game) will test your knowledge and you can record, play back and compare your pronunciation as well. Words are broken into topics (first words, food, colours, body, numbers, time, shopping, countries) and you can choose from many different interface languages (although in Latvian the word “food” has been incorrectly translated as “ēdienis”). The user-friendly interface makes this suitable for toddlers, children as well as mature-age students.

Produced by Rīga-based software development company Tilde, this App goes beyond the dictionary by providing the ability to translate words and sentences between Latvian, English and Russian languages. To test this out I copied a whole paragraph from Apollo.lv, a Latvian news portal, pasted it into Translator and in less than 15 seconds got a comprehensible English translation. Translator requires an Internet connection to connect to the Latvian corpus so you never have to worry about upgrades, but if you lose your WiFi or 3G connection you also lose its powerful translating capabilities. Tilde prides itself on more accurate translations compared to the Google Translate service.

The author of the book Miljons Indra Sproģe came up with the idea of a flipbook divided into three separate sections – the top section containing 100 nouns, the middle section 100 verbs and the bottom section 100 nouns. Flipping each of the sections can result in wild and wacky sentences providing a fun learning experience for the young reader. Apparently to keep the words simple the author tested all 300 words with her 6 year old son – those that were not recognised were immediately removed from the list. The iPad version of Miljons is a wonderful reproduction of the book with added animation and quick search features. I found myself continually looking for the missing audio option so that I could listen to the newly formed sentence as well.

The most difficult area of Latvian grammar has been transformed into an App which displays the many different verb forms for any verb of the Latvian language. You can choose between mood (izteiksme), voice (kārta), tense (laiks) and conjugations (konjugācijas). Even homonyns such as aust, dzīt and irt are recognised. Latvian Verbs is ideal for all levels – from the beginner learning the basics of verb conjugations to the more experienced Latvian speaker who needs a quick and useful grammar reference.

Enter a noun (sirds, ūdens, ļaudis, grāmata, biedrs, alus..), proper noun (Kārlis, Vecrīga, Ziemsvētki), adjective (vismīļākais, pēdējais, brīnišķīgā), numeral (trīs, piecpadsmit) or pronoun (es, tavs, šis, tā, kas…) into the Latvian Nouns App to view all of the different noun forms or declensions. The most recent version allows for a combination of words, eg. šī brinišķīgā diena, mans mīļais kaķītis, Pēteris Ābele as well as the ability to change the interface language between Latvian, English, Russian, German and Swedish. You can even email the declension table to your fellow students while the teacher is not looking.

Not only can you connect to thousands of radio stations worldwide, but this App allows you to record audio content for playback at a later time. Finding “Latvijas radio”, “Oira” and more than 20 other radio stations from Latvia was remarkably easy (for a current list of Latvian radio stations go to the Radio section of Latvians Online). Where it gets even more interesting is using the tablet’s AirPlay feature together with an Apple TV – suddenly your favourite Latvian radio station can be piped to your living room speakers and all wirelessly controlled from your iPad.

Almost every Latvian uses Skype – it is both free, but even more importantly, it was invented in the Baltics (to be precise – in Estonia). With the recently enhanced video features of the iPad there is no excuse for not connecting up with a fellow Latvian from the other side of the world.

The Latvian social network equivalent to Facebook – draugiem.lv – is still going strong with as many accounts as there are people living in Latvia (nearly 2 million). It seems that just about every Latvian primary school kid has a draugiem.lv account. Although the iPhone version has been available for several years the management recently hired iOS programmer Kristers Jurševskis who didn’t disappoint and managed to release a new iPad version just in time for his 16th birthday.

One of the most popular newspapers in Latvia, Diena has been providing an iPad version for over a year. It is available for download every Friday and presents a summary of news and events from the previous week using a combination of text, video and interactive links. Rumor has it that a six figure investment was required to develop the original custom App, but when Apple begun offering its Newsstand App late last year, it was only a matter of time before 5Diena would join the ranks of other newspapers and magazines onto the new publishing platform. Diena also provides their daily newspaper via the Diena App, a great alternative to receiving the paper copy.

A Latvian word a day – every day you will be alerted to a new and unusual Latvian word together with an explanation and how it is used. These words have been hand-picked by the author of the Novadu vārdene and Tautlietu vārdene dictionaries, prof. Janīna Kursīte. If a word pops up that takes your fancy you can share it with others on Facebook and Twitter.

A great example where the built-in Latvian language support of the iPad can be used to customise an existing educational App for Latvian use. Sentence Maker helps students learn to make and complete their own sentences by moving words around with the touch of their finger. It offers a wide range of customisation options so you can replace or create new words, phrases and sentences and attach new voice recordings and images. This flexibility allows the teacher or parent to determine the complexity of the sentences.

There were also several Apps that didn’t make it onto the school’s iPads. The Draugiem TV App is yet to sort out the licensing issues to enable the sizable Latvian population living outside of Latvia to view Latvian TV. The Eyes of Latvia App, which lists Webcams ranging from the evolving National Library, Rīga Old Town, Daugava River and the ski resorts, also failed to provide a real time view.

Lietotnes LV, which claims to list all Latvian related iPhone & iPad Apps, has not been able to keep up with the increased number of new Apps in the last couple of months and continues to refer to older versions that no longer exist in the App Store. iPhone Apps that have not been adapted for the larger iPad screen were also excluded.

After spending considerable time browsing the App store I also came to realize that the iPad already came preloaded with many useful Apps. Maps and Google Earth can transform a dry Latvian geography lesson into a virtual walking tour of the streets of Riga or a bird’s eye view of the lakes of Latgale, the YouTube App has videos ranging from Latvian history, news and current affairs, song festivals to the latest Latvian rock groups and flash mobs in central Rīga, the Videos App can play the latest Hollywood blockbusters in Latvian, the Camera App can take videos of students for language coaching purposes, iBooks can access the growing list of electronic books and iTunes provides a convenient way to tap into the latest Latvian music.

Then there are Apple’s own Apps such as Pages which allows you to create and edit Microsoft Word documents (you can also use a physical wireless keyboard if you can’t get used to the touch screen keyboard), Keynote for producing presentations and iMovie for creating school video projects.

With each advance of technology the possibilities for learning Latvian are growing. Any suggestions for other Apps Daugavas skola should be installing on their iPads?

2 thoughts on “Latvian school and the iPad”