Earlier this year the Web sites www.apple.com.ee, www.apple.lv and www.apple.lt breathed their first signs of life as a Baltics distributor, AVAD Baltic, was established in Vilnius. Up until now Apple dealers in the Baltics have had to deal with the notoriously unreliable link via Apple IMC Russia, causing endless weeks of delivery delays. No wonder then that there was even a dealer or two who was prepared to bypass the official distribution channels and source Apple computers directly from the United States and elsewhere.

With Moscow’s apathy towards the region and the increasing dominance of Microsoft in the Baltics it looked like Apple was fighting a losing battle. But thanks to the roaring success of the iPod and iPhone of late this is now all about to change.

In the space of a few months we have already seen considerable changes. Now all three Baltic countries have their own official Apple Web sites. In the “Support” section you can now download the user manuals of all the latest Apple products in your very own local language.

A videographer, musician and photographer seminar was organised at the end of March in Vilnius and attracted 350 Macintosh enthusiasts from all three Baltic countries. Future seminars and workshops are slanted for Rīga and Tallinn as well.

The aggressive sales targets for the next three years in the Baltics are expected to generate a tenfold increase in sales. Expect to see a whole lot more Apple outlets as a result. In Latvia, Lattelecom, the government-owned telecommunications operator, has decided to get in on the act and for several months on its home page has been displaying a message “Tagad tirgojam arī ābolus” (We now also sell apples). Some are rumouring that this may be a precursor to the introduction of the iPhone, but of course Apple is very hush about any product announcements.

Capital still leads the way and sells two-thirds of all Macintoshes sold in Latvia. Capital has five stores in Rīga. One—the only Apple Premium Reseller in Latvia—is a mini-version of the Apple store concept and is located on Brīvības Street just across from the Vidzeme market. Other stores now carrying the Macintosh brand include Elkor, BMS Megapolis, BCCS and the online Ābolu Veikals.

In other related activities, the Rīga-based NEXT high technology magazine (published by SK Latvia Publishing House) put the spotlight on Apple products by including a special pullout section in its April 2008 issue.

More than 15 years ago there was also a revival for Apple and the Macintosh computer in Latvia. Apple announced official support for all three Baltic languages by publishing the Apple CE font standard in 1992. This meant an end to the confusing array of non-standard Baltic fonts and a smooth transition to the future Unicode standards. Complete Baltic language support was also provided for the first time for the Macintosh with a quick and easy to install add-on for System 7.1 to System 9.1. The Rīga Macintosh Users Group was created and for several years met on a regular basis at the Apple Training Laboratory (kindly financed by Starlett, which was the leading Apple dealer at that time) at the University of Latvia. As a result of the meetings, several home-grown Latvian localised versions of software titles were also produced. But with Moscow continuing to stifle the Baltic market this enthusiasm only lasted for a couple of years and even the stalwart Apple dealer Starlett decided to refocus on other products.

Today the Rīga Macintosh Users Group has been replaced by a growing online community at Mac.TunT.lv. Now in its third year of operation, the site attracts more than 500 visitors daily and has become the most popular online meeting place to share tips and advice with other like-minded Latvian Macintosh enthusiasts. To register and have your say on the site costs 95 santīms (about USD 2) for 3 months or EUR 3 for 3 months if you are located outside of Latvia.

But site owner Ingus Bukšs, or Boo as he is known online, didn’t stop there with his Macintosh evangelising efforts. In collaboration with www.xnet.lv and hosting provider SIA Tup un turies, Boo also set up an online store at www.aboluveikals.lv. The store contains the largest range of Apple products in Latvia. The site is very easy to navigate and includes a useful visual cue besides each product showing availability and delivery options.

Around the same time Guntis Bukalders decided to share his passion for the Macintosh and started a blog called “Gunta blogs.” The beginning of this year saw a site revamp as well as a new and easy to remember Web address at www.macpasaule.lv. This site is highly recommended for anyone about to purchase a Macintosh or for those switching over from the Windows platform (which he has aptly named as “slēdzīši”). Bukalders’ regular tips, tutorials and product reviews make this Web site an essential bookmark for all Latvian Macintosh users. Not only is Bukalders a pastor at the Seventh Day Adventist Church, he also maintains several other Web sites including adventisti.lv, baznica.lv and bibele.lv.

When I asked Bukalders what swayed him towards the Macintosh, he recounted in detail the frustration that he had experienced with the other platform, confronted with constant hardware and software failures. He was amazed when he got his first Macintosh plugged it in and it just worked. He has never looked back since.

Earlier this year saw the launch of a new and alternative Apple discussion board at www.macforum.lv, run by Valdis Takeris. Takeris’ choice of computing platform no doubt has been influenced by his father, who was a founding member of the Rīga Macintosh Users Club back in the early 1990s. An added benefit of www.macforum.lv is the organisation of discussions by topics and the fact that it is built on top of the most widely used open source forum solutions, phpBB. This summer will see the release of even more features.

One of the most promising developments lately has been the release of a Latvian spellchecker and dictionaries for Macintosh OS X 10.5 (Leopard), the latest operating system from Apple.

Kroko for several months has also been working on another Latvian proofing tool, trying to improve on the already existing but limited cocoAspell spellchecker. After several unsuccessful attempts a decision was made to go another route using MySpellX and Jānis Eišaks’ OpenOffice Latvian spellchecker (available through the OpenOffice Wiki). The result of this perseverance was Pareizrakstība, a Latvian spellchecker that works in most applications that make use of the system-wide spell checking services. Examples include Mail, TextEdit, iCal, Skype and others. As of writing there were known problems with iWork ‘08 (Pages, Numbers, Keynote) which the author has agreed to address in a future update. In any case users are not complaining too loudly because both Vārdnīcas and Pareizrakstība are offered by Kroko as donationware and are available as a download from mac.krokoarch.lv.

Kroko also plans to create an easy way for users to submit additions and corrections back to Eišaks so that the open source Latvian spell checker dictionary can be regularly updated and improved, benefiting both the OpenOffice and Macintosh user community.

With both Apple (AVAD Baltic) and the local Macintosh user community increasing their presence in the Baltics, we can expect to see even more innovative products and services in the near future. 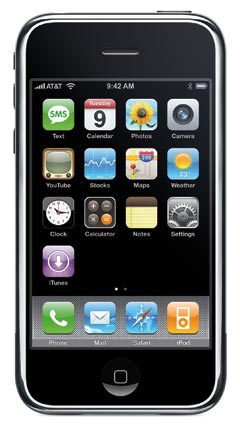 With the growing official presence of Apple Inc. in the Baltics, introduction of the popular iPhone may not be far behind. (Photo courtesy of Apple Inc.)

11 thoughts on “Apple re-emerges in the Baltics”