Tarkšķi is a Latvian children’s and youth folklore ensemble with a 25 year history, originally founded in Rīga, but later established in the Iecava district, in the Zemgale region of Latvia. Throughout its history, many of its members go on to further musical projects and groups, such as Tarkšķi members Laura Marta Līcīte and Laura Liepiņa, who went on to join the ethnomusic ensemble Tautumeitas.

Tarkšķi have since expanded, and an offshoot group was created, this time with a focus on performances that include the mandolin (and many of them – the songs often have five or more mandolinists performing). Appropriately entitled Tarkšķu mandolīnisti, the ensemble performs songs from the Zemgale region of the early and mid-20th century, and they released their first album – Smuka meitiņ’ – in 2018.

The group’s leader is Kristīne Karele, and she also arranged all of the performances on the album. According to an interview with Karele, the interest in the mandolin was partially due to the mandolin being actively used in ensembles in Iecava throughout the years, even in the early 20th century. Karele went through folklore collections and recordings to gather songs for the group’s repertoire, focusing on songs from Zemgale, and, where possible, from the Iecava region.

On the CD, Karele is joined by mandolinists and vocalists Katrīna Karele, Anna Patrīcija Karele, Kristīne Karele, Kristija Laura Čipena, Rebeka Ivanova, as well as guitarist Viktorija Veinberga, and a number of young singers (some as young as nine years old). Beyond the mandolin, the members also add violins, accordions, and percussion to make for a wide instrumental variety.

The goal was to gather lively and active songs, and the ensemble succeeded quite admirably in this effort, beginning with the first song on the album ‘Leijerkastnieks’, a song about an organ grinder playing on the street. There are many such moments on the album, such as ‘Ak, meitiņas’, a song about the foolishness of a young girl getting married, since she is likely to spend her life with someone who drinks and argues often.

Many songs are about the relationships between girls and boys (particularly girls complaining about boys), such as ‘Meitas puišus apsūdzēja’, where the girls complain about the boys’ behavior to the superintendent in Jelgava, who then threatens to send the boys to Germany unless they change their ways. There are moments of sadness as well, such as in ‘Kārlis un Anna’, where Kārlis must leave his Anna to go off to war, but, when he returns, he finds Anna’s grave.

The sound of multiple mandolins at once provides for a unique sonic texture for the group, occasionally sentimental, with a touch of the Mediterranean about it, such as in the instrumental waltz ‘Grievaltas valsis’, with its mandolin harmonies joined by the melody of the violin. A similar effect is achieved on another instrumental number – ‘Poļu kadriļa’ (Polish quadrille or square dance), which features remarkably precise and dexterous mandolin playing. Credit also must be given to album producer Kaspars Bārbals (who has produced many Lauska folk releases), for the crispness and clarity of the performances.

Tarkšķu mandolīnisti’s Smuka meitiņ’ is certainly one of the most exuberant and joyful Latvian folk albums in recent memory, and is made even more distinctive and memorable with the sounds of multiple mandolins. With their energetic and buoyant performances, the album makes for a delightful and charming listen. As with many of their releases, the Lauska folk music label has given many Latvian ensembles the opportunity to record and release their music for listeners to hear, and Smuka meitiņ’ is a treat to listen to. 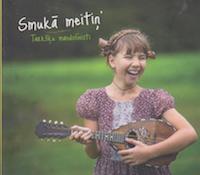