From July 8 to August 6, 1958, a team from the Latvian SSR Academy of Sciences traveled to the Ludza and Kārsava districts in the Latgale region in eastern Latvia to gather folklore materials and record the songs and singing styles of these areas. Led by Alma Ancelāne (who worked in the Folklore Department at the Language and Literature Institute), and joined by other employees and students, the team, which also included future composer Pauls Dambis, gathered information so as to preserve these songs, most of which were passed around in an oral tradition, and the team compiled an extensive record from their expedition.

Recognizing the wealth that was gathered in this one expedition, the traditional folk singing group Saucējas, based at the Latvian Academy of Culture, decided to record an album of just the songs collected during that month in 1958. Entitled Trīci, munu ustabeni!, the CD contains performances of 29 songs from the Ludza and Kārsava districts (which is actually just a small percentage of the total folklore material gathered). Saucējas, directed by Iveta Tāle, also includes singers Marianna Auliciema, Kristīne Jansone, Indra Mētra, Janta Meža, Signe Pujāte, Kristīne Rotbaha, and Vineta Romāne. Most of the songs on the album are sung unaccompanied, but some have musical accompaniment.

One of the many aspects that makes the gathered musical material significant is the presence of multi-voiced singing (rather than just everyone singing the same melody in unison). For example, the multi-layered harmonies of “Kiukoj, uoru dzagiuzeite”, originally performed by the Kārsava ethnographic ensemble, a song about a girl that begins to cry when she hears the cuckoo singing, as she misses her brothers.

Saucējas have endeavored to make sure the performances are as authentic as possible – to make it sound like these are indeed songs as they were heard in the Latvian countryside – in other words, perhaps not entirely perfect and polished, but full of vitality and life. In songs like “Iz pīguli, iz pīguli”, “Malni muni kumieleni”, and “Tolka lela, tolka moza”, the group intentionally go for a loud sound, like women singing in a field while working.

The songs on the album cover many themes, reminding listeners that Latvians have folk songs for just about any occasion. Besides themes of work and relationships, there are songs about war and seasonal festivities. The collection is bookended by two lullabies – “Sešas peles mīgu vylka” and “Atnes, peleit, mīdzeni”, giving the song collection an almost circular sense – that the day begins and ends with sleep, and perhaps to suggest the importance of singing to children, so that the songs and traditions continue to be passed down throughout the generations.

Recording folk songs, particularly those sung by large groups with multiple voices and harmonies, is always a challenging task, and one additional aspect that makes this a successful release is that the group enlisted veteran folk music producer Gatis Gaujenieks (who has produced records for groups like Iļģi and Laiksne), and there is a crisp clarity in the immersive vocal performances.

As with many other releases from the Lauska record label, the packaging is again exceptional. The CD comes with a book of almost one hundred pages, detailing the songs and the research expedition. It provides many fascinating details about the time – one might wonder how it was possible in the late 1950s, deep within the time of the Soviet occupation of Latvia, that a team could research Latvian folklore (particularly considering the Soviet policy of the Russification of Latvia). As it was during the ‘Khrushchev Thaw’, certain restrictions were relaxed, but lest anyone forget that they were in the Soviet Union, as part of the expedition, researchers also had to ask participants if they were, for example, members of the Communist Party. Information is provided in both English and Latvian, and there are also many pictures from that era.

One of the more unique Latvian cultural events of the 1950s has led to one of the most unique Latvian folk music albums.  Providing a fascinating picture of how Latvian culture was still alive, to a certain degree, while part of the Soviet Union, but, at the same time, presenting a broad view of Latvian folk singing and a variety of themes, Trīci, munu ustabeni! is a faithful and authentic re-creation of a visit to small villages in eastern Latvia. Saucējas present the full spectrum of singing on the album – from intimate individual performances to loud ensemble performances, and the group has created not just an important historical document, but also a joyous and resplendent folk music album.

Also, all of the original audio material from the 1958 folklore expedition can be found here. 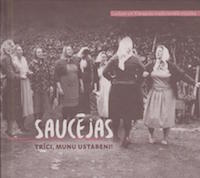