Georgijs, Sergejs and Andrejs Osokins, collectively known as the Three Osokins, are three of the most distinguished and accomplished piano players in Latvia. Father Sergejs, as well as two sons Georgijs and Andrejs, have been performing together since 2015, both as a trio as well as with orchestras. All three have been awarded the Latvian Great Music award (Sergejs in 2004, Andrejs in 2008, and Georgijs in 2015).

To commemorate Latvia’s 100th birthday in 2018, all three recorded works for solo piano by Latvian composers. The CD, entitled The Three Osokins in Latvian Piano Music, was released by the Latvian national record label Skani as part of the Latvian Centenary series. The album collects piano works written throughout Latvia’s history to, as the artists have stated, “show our country’s music in all of its splendor and diversity”.

The youngest Osokins, Georgijs, performs two works by composer Pēteris Vasks – ‘Vasaras vakara mūzika’ and ‘Baltā ainava’. Like many other Vasks works, themes of nature are woven throughout these pieces, and Georgijs provides the necessary dramatic flourishes, with moments of calm and tranquility balanced with mysterious and ominous elements, particularly in ‘Baltā ainava’, with its wintry scene that is at times full of wonder, but at other times there is an uneasy tension, and Georgijs provides a vivid portrayal of this chilly vision.

Sergejs Osokins performs works by Jānis Zālītis and Jānis Ivanovs for his contribution to this collection. Zālītis’ piano compositions are not as well-known as his songs for choir and solo voice, but, in the hands of Sergejs, these piano pieces (all of which are brief miniatures) reveal a similar kind of lyricism and musical flow that are in Zālītis’ choir works, such as the playful ‘Mazurka’ or the appropriately sentimental ‘Reminiscence’.

The works by Ivanovs are two sets of preludes, the first set from the early 1950s, and the second from the late 1970s. The early 1950s were an era of severe repression in Latvia, and artists needed to express a kind of ‘socialist realism’ in their works – a need to express how genuinely ‘happy’ everyone was in the Soviet Union. However, even with these artistic constraints, Ivanovs was still able to create memorable piano compositions that, in Sergejs’ performance of them, are lively and energetic. Sergejs contrasts these with the later preludes, composed near the end of Ivanovs’ career, which are more somber and have a kind of resignation about them, and provide for a fascinating comparison with the earlier preludes.

The most recent composition on this collection is Artūrs Maskats’ ‘Kazbegi: Tsminda-Sameba’, which was actually dedicated to Andrejs Osokins. The work, inspired by a journey Maskats took to the Tsminda Sameba (Holy Trinity) monastery in the Caucasus Mountains in Georgia. The nearly twelve minute work, which includes many elements of reverence and awe, builds in intensity as it reaches its thunderous conclusion, and Andrejs provides a memorable and engaging performance of this mountainous musical landscape.

Andrejs Osokins concludes the album with a collection of works by the founder of Latvian classical music, Jāzeps Vītols. These provide for a lyrical and beautiful musical journey, from the tender lullabies ‘Dusi saldi, mans bērns’ and ‘Šūpļa dziesma’, to the colorful imagery in ‘Viļņu dziesma’, where Vītols describes the waves by his summer home in Pabaži on the coast of the Gulf of Rīga, both majestic and tempestuous, and Andrejs makes this scene come alive in his performance.

All three Osokins – Sergejs, Andrejs, and Georgijs, have come together to create an immensely satisfying and enjoyable collection of piano works by Latvian composers on The Three Osokins in Latvian Piano Music. Spanning more than a century, these pieces allow the listener to travel throughout Latvian musical history, from the early 20th century to today. The performances reveal the many facets and features of Latvian piano music, from the serene to the stormy, from the hopeful to the resigned. All three of the Osokins vividly display their talents for interpretation and performance, and confirm not only their own abilities, but also the rich and abundant treasures that can be found in Latvian piano music. 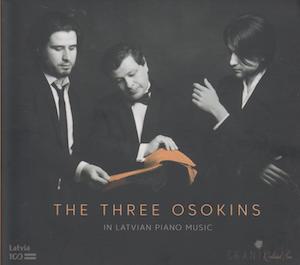