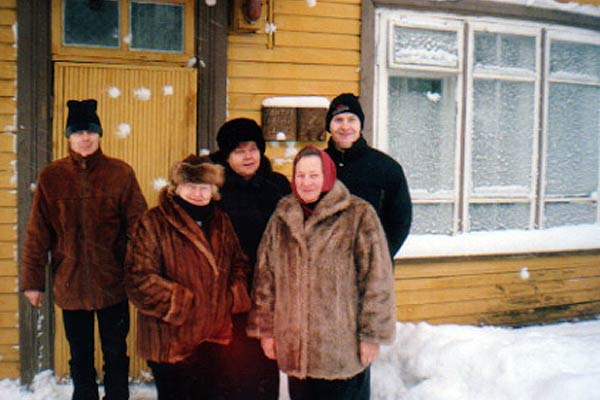 Some members of the Akmenė Latvian community pose for a wintery photograph. Back row from left to right: Tomas Pliuskys, Alvīne Jankauskiene and Valdis Bogavičius. Front row: Valda Pliuskiene, and Spodra Bogavičiene. (Photo by Philip Birzulis)

While most Latvian diaspora communities are thousands of kilometres from their ancestral homeland, Akmenė in Lithuania is almost within walking distance. Latvians have lived in and around this small town, just 20 kilometers from the current border, for two centuries.

The first settlers were farmers from Zemgale, Latvia’s southernmost province, who arrived in the early 1800s to buy cheap land. Although assimilation and Stalinist terror have reduced their numbers, today there are still 30 Latvian families in the town of 3,500, for a total of about 360 people in the Akmenė District. These are some of the roughly 4,700 Lithuanian citizens with the nationality “Latvian” written in their passports. Based on the number of out-of-country voters at the last Latvian parliamentary elections in 1998, the Latvian embassy in Vilnius estimates that there are additionally 120 citizens of Latvia residing in Lithuania.

Unlike their Catholic Lithuanian neighbours, the Latvians of Akmenė still observe the Lutheran faith of their ancestors. A wooden Lutheran church was erected in 1829 in the village of Alkiškiai, 7 km from Akmenė, and a stone one built in its place in 1841 is still used for services. A cemetery adjacent to the church contains numerous Latvian names and inscriptions. One of the headstones is dedicated to Edvīns Švāģeris, a parish priest who served seven Latvian parishes along the border, even under Soviet rule, until his death in 2001. Today, a Latvian minister from Kaunas, Lithuania’s second city, makes frequent visits.

The Latvians in Akmenė say that before the war there was a thriving community based around the Alkiškiai church, which supported two choirs and two Latvian societies. There were even two Latvian schools that closed when the teachers were shipped off to Siberia in 1951. The local people were successful farmers, a quality that brought tragedy for many of them during the mass deportations of 1949. Some hid with relations in Latvia to escape persecution, while others who returned from Siberia were banned from resettling in their old homes. Others moved to Latvia after the war because life there was more orderly than in Lithuania, say the locals, leading to a sharp reduction in the numbers of Latvians.

Life is not easy today either. During the Soviet era, several factories making cement and construction materials provided a relatively high standard of living, but the closure of these plants after independence has led to high unemployment.

These economic worries make it hard for Akmenė residents to travel to Latvia. They are especially annoyed at rules forcing them to buy insurance every time they cross the border. Furthermore, they complain that while the Lithuanian government builds houses, sends teachers and help its co-nationals living in Latvia in other ways, Rīga doesn’t do much for its own people. They would like a Latvian teacher to visit them at least occasionally.

Despite these frustrations, the community is still active. Unlike Lithuanians, the Latvians celebrate Jāņi (Midsummer’s Eve) and enjoy singing Latvian songs. The local council gives them free use of two rooms in a community centre where books, maps of Latvia and other items demonstrating the pride they have in their origins are displayed. Several hundred Latvians come together at the annual kapu svētki, the day for the remembrance of the deceased, at Alkiškiai. While intermarriage with Lithuanians has been taking place for at least two generations, some young people in their 20s and 30s still speak Latvian, although their own children may be assimilated.

This process is reflected in the life story of Valda Pliuskienė. Her grandmother and mother moved from Rīga to live with relatives in Akmenė during World War I, while her father, who was born in Auce in Zemgale, joined his family in Akmenė before 1914. Pliuskienė married a Lithuanian, and while her son Tomas Pliuskys speaks Latvian, he thinks of himself as a Lithuanian. Only one of Pliuskienė’s four grandchildren speaks Latvian.

Nevertheless, the community still maintains contacts with its ethnic homeland. Choirs and folklore groups from Dobele, a town in southern Latvia, often visit Akmenė to give performances. The Akmenė Latvians also have strong ties with their compatriots in Klaipeda, Joniškis, Kaunas, Vilnius and elsewhere in Lithuania. And they show off their Latvian language and culture at festivals in the local district.

It seems likely that this southern Latvian outpost will be around for a while yet. 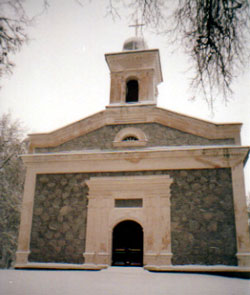 The Latvian Lutheran Church at Alkiškiai, near Akmenė. (Photo by Philip Birzulis)

2 thoughts on “South of the border: Latvians in Akmenė”