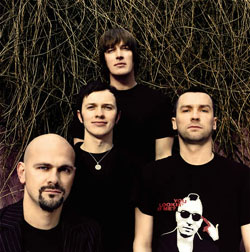 To call Prāta Vētra a Latvian phenomenon would be an understatement. In a time when other groups struggle to attract listeners to concerts and sell very few albums (partly due to piracy, partly due to listener apathy), Prāta Vētra (or, outside of Latvia, BrainStorm) defies expectations and sells many compact discs and attracts hordes of people of all ages to their concerts.

It has to be seen to be believed. The Prāta Vētra juggernaut rolled into Rīga on Aug. 21. The open-air venue at Mežaparks was filled with listeners eagerly awaiting the concert. Reports are that more than 40,000 people attended. After the concert ended, the flow of people reminded me of that episode of “MacGyver” where he battled army ants—just this ocean of humanity all hoping to make it to the tram or trolleybus or other method of transportation.

The last time I saw Prāta Vētra was in December 2000 at Ķīpsalas halle in Rīga. Though also a reasonably sized venue, there were significantly less people there, maybe a thousand or so. That concert, as well as the 2003 concert at the Skonto stadions (available for viewing on a highly recommended DVD) gave an idea of what makes this band so popular. Prāta Vētra has all the necessary tools to be successful: great songs, quality musicianship, a charismatic frontman in Renārs Kaupers, and—essential—an army of teenage girls ready to scream their lungs out (not to mention buy their records!).

After calling the information service 118 to find out what time Prāta Vētra would be on stage and being told 9 p.m., I headed off to Mežaparks. Around 9 p.m. the second opening band, Double Faced Eels, took the stage. The Eels are a punk-pop band and have a current hit, “Zilais valis” (“Blue Whale”). I’m not too familiar with the band’s music, but they played well and were having a good time, so the time spent with them was enjoyable. I missed the first opening act, Mofo. Influenced by British pop, Mofo has recorded several singles and expects to release its first album this fall.
At this point, I was standing near the stage. But as 10 p.m. approached, it seemed like all 40,000 audience members wanted to get closer to the stage, so it got more and more packed to the point where I was unable to move. I had elbows digging into me from all sides. It seemed wise to extricate myself from this mass of people, so, sucking in my chest, I pushed my way out. I find it hard to believe that no one got seriously hurt at the concert, as it must have gotten even crazier near the stage when the band took the stage and everyone started jumping up and down. Some people had brought their little children—perhaps not the wisest course of action, but I guess everything turned out all right in the end.

Prāta Vētra opened with the title track of its most recent album, Četri krasti. The crowd became electrified and sang along with every word. For the next two hours, Prāta Vētra performed both old and new songs, and the audience was in a rapturous state the entire time.
Acknowledging the diversity of the audience, Kaupers addressed the audience in three different languages—Latvian, Russian and English.

I am not a fan of huge concerts like this. Besides the long lines at the bathroom, there is a certain loss of intimacy at these mass gatherings. The artists seem so distant, and usually the sound is muddy (especially in open air venues like Mežaparks). But the sound was better than expected. Vocals were clear and the instruments were distinguishable. However, with that number of people, the side effect is that often the audience is louder than the band. This was the case at more than a few moments during the concert, especially during the quieter songs like “Spogulīt, spogulīt…” Though it is nice that the band is able to bring record-breaking numbers of people together for a concert, I would much rather prefer that Prāta Vētra plays smaller venues.

Above all, the band was very, very polished. Everyone was in top form, knowing that they had 40,000 people to satisfy. In big shows like this, there is very little room for anything to go wrong, and as far as I saw nothing did. The performance was precise and professional.

Because no concert review would be complete without complaints about the set list, I must beg the question as to why nothing was played from Viss ir tieši tā kā tu vēlies. No “Tavas mājas manā azotē” or “Romeo un Džuljeta”? In fact, quite a number of big hits were left out, for example, “Tu izvēlējies palikt,” “Starp divām saulēm,” “Brīvdienas nav manas laimīgas dienas” or “Īssavienojums.” I agree that the big hits sometimes need a bit of a rest or they get stale, but the band did find the time to play “Lidmašīnas”—a song that certainly can use a bit of rest.

However, the set list had many standout selections. Highlights of the concert were songs from Dienās, kad lidlauks pārāk tāls, including the driving “Pa pareizām” and the lyrically beautiful “Es gribu.” The song that received the loudest response was the Russian-language “Skoļzkie uļici” (“Slippery Streets”). Originally recorded with the Russian group Bi-2, the song is not on any Prāta Vētra album, but can be heard on MICREC’s 100% svaigs Nr. 6 compilation.

The group had set up a mini-stage, decorated to look like a living room, beyond the main stage in the crowd. From here the band went deep into its back catalogue, drawing a few numbers from the recently re-released album Veronika and elsewhere. In an odd segue, Prāta Vētra went from its first big hit, “Ziema,” to the Latvian folk song “Es nenācu šai vietā” (though thankfully the band only performed the first few of the dozen-some verses of the song). The highlight of this section of the concert, and a particularly pleasant surprise, was the performance of the Imants Kalniņš song “Elpo.”

Particularly touching was Prāta Vētra’s tribute to Mumiņš (Gundars Mauševics), the band’s bass guitarist who died in an automobile accident last year. A recording of the song “Spacemuminsh” was played while photographs and short movies of him were shown on a large screen.

The audience was overall very well behaved, though hopefully no one got crushed there in the mob in front of the stage. With all the people carrying beer around I’m surprised I wasn’t drenched by the end of the concert, but I did get smoke blown in my face from all directions. The benches in Mežaparks got the brunt of the abuse. Audience members were standing and jumping up and down on them, so quite a few are going to need replacing!

The subdued waltz-like “Māsa nakts” from Četri krasti closed out the evening. Perhaps after a two-hour, high-energy affair, this was an appropriate warmdown to end the evening on a mellow note. Then began the mad dash to the trams (sardines, anyone?) which supposedly were going to be free for all but ‘twas not the case.

Overall it was a very enjoyable evening. The lack of intimacy and the throngs of screaming fans did nothing to dispel the notion that Prāta Vētra is a truly great band. Even when before 40,000 people, it knows how to send everyone home happy and made this concert (as most every Prāta Vētra concert) a special event. Quibbles about the set list aside, with two hours of music how can you go wrong? Come back soon!