Latvian folk songs resonate far beyond the borders of Latvia – the timeless melodies and words are the thread that weaves together Latvians all over the world – no matter where they might have been born or raised. For many diaspora Latvians, folk songs are the main element that helps them maintain their Latvianness throughout the years. There is something about Latvian folk songs that makes every new generation want to sing them and pass them down to future generations. No matter that the songs might be centuries old, each generation discovers them anew and finds something fresh and interesting in them.

Folk songs also inspire Latvian musicians all over the world. One such example is the ensemble Austrumkalns, based out of London. This quartet – who call themselves “London’s number 1 Latvian-pop-folk-girl-band” – released their first album Akcenti in 2017.

The group – made of two pairs of sisters (Anna Grīnberga-Saull on vocals and violin, sister Laila Grīnberga – on vocals and wind instruments, as well as Andra Zobens-East – on kokle, cello and vocals and sister Karolīne (Līnīte) Zobens-East on vocals, guitar and accordion) – was established in 2011 (though the foursome have been friends since childhood). They perform regularly, not just at London Latvian events, but also at world music festivals in Belgium, Germany, and, of course, in Latvia. After a Kickstarter campaign that raised more than £3000, the group set about recording Akcenti.

The fact that the sisters have been singing and performing together since childhood becomes immediately apparent on the record, as there is an exceptionally high level of musicianship and professionalism in every song. This is already clear in the opening track, ‘Tautiešami roku devu’, a rousing dance song that jubilantly sets the stage for the rest of the songs on the album. The sisters’ enthusiasm brings an added energy to this and many of the other songs on the album.

As all of the group members are singers (as well as multi-instrumentalists), this provides another artistic dimension for the music of Austrumkalns, for example the intricate harmonies on the song ‘Rūtoj’ bite, rūtoj’ saule’, a playful Latgallian song about a game between the bee and the sun.

Though many of the songs are traditional interpretations of Latvian folk songs, the ensemble does occasionally rearrange songs, such as the well-known folk song ‘Aiz kalniņa dūmi kūpa’ features some significant changes to the familiar melody, providing a new and creative take on this age-old song.

Though much of the album is active and full of vitality, there are a few calmer numbers which are just as memorable – such as the mystical wedding song ‘Dej eglīte, lec eglīte’, or the reggae-tinged midsummer song ‘Visu gadu dziesmas krāju’.

Also adding to the polish of the album is producer Kaspars Bārbals, who, besides being a member of the drum and bagpipe ensemble Auļi, is also the experienced producer of many Latvian folk records, and has an innate talent for vividly bringing out all the varied elements of the music. This works especially well on Akcenti, as the multi-voiced harmonies are an essential aspect of Austrumkalns’ sound.

Akcenti is yet another excellent release from the Lauska record label, who, in the past few years, have been the leading force in presenting the many facets and interpretations of Latvian folk music. Austrumkalns display a natural talent and Latvian folk song affinity on the collection, creating a both youthfully enthusiastic and seasoned professional sound. Akcenti, a vibrant musical outing, provides for a joyous and spirited listen, showing again how Latvian folk songs can inspire Latvians all over the world. 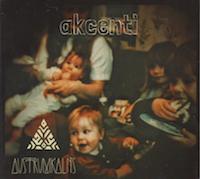