Latvians Online visited the Latvian Artisans’ workshops that take place annually over 2 days at Melbourne Latvian House. The 4th annual workshops were run this year. We caught up with Ilze Švarcs, the main organiser and driving force behind the workshops.

Who had the idea to start running the Latvian Artisans’ workshops and market?

The idea sprang from a wonderful group of artisans, known as the Latvian Australian Artisans Guild. (LTMF = Latviešu tautas mākslas fonds* ). We are a core group of around 10 members who meet about once a month and undertake projects to foster Latvian culture and identity through maintaining and furthering Latvian applied arts. We are involving a growing number of artisans who cannot attend meetings, but are willing to share their knowledge and skills by teaching at our workshops, and being involved with our work in other ways. The number of participating artisans is edging 20, which is just fabulous!

* The group currently known as LTMF is in the process of changing its name back to the name of the group formed in in 1965 during the Australian Latvian Culture Festival in Melbourne. The group was called the LDAA Latviešu Daiļamatnieku Apvienība Austrālijā or the Latvian Artisans’ Association of Australia. I love the English acronym: LAAA!

How did the idea come to you? Did something happen to give you the idea?

I lead the LTMF. I become passionate about rebuilding the Latvian Australian artisans’ movement for two reasons. Firstly, I participated in organizing an exhibition of vintage Latvian crafts here in Melbourne in 2012. Such an exhibition had not been mounted for years, and I was amazed at the variety and beauty of Latvian craftwork. I felt really proud of my Latvian heritage and thought this is the best marketing tool for promoting Latvia, which is still so little known in the world. Furthermore, I saw that some of the people who had created these beautiful works were still with us and are still very active, kind and generous, but they are elderly. If we want to harvest their knowledge and pass it on, it must be done straight away.

Then I heard some news which struck me as a cultural tragedy: the family of a fabulous Australian Latvian craftsperson who had died several years earlier, disposed of his tools and materials, not realizing their incredible worth. Specialised tools, particularly old, well-made tools, are hard to find and often very, very expensive to replace. Similarly, old materials can be a precious, rare find. Some of the disposed materials included started projects from which we could have learnt so much today, and unique, customized tools, which cannot be replaced.

I now regularly write in the Latvian newspapers to encourage people to donate any relevant tools, materials and items to us. We either use them in our workshops, or donate them to the Australian Latvian Summer School in Adelaide, or we sell them at our vintage artisans’ market to raise funds for our projects. 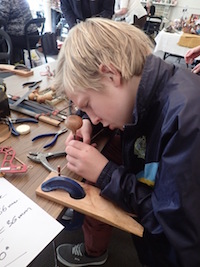 How many times have the workshops been held now?

We just held our 4th round of workshops. The first was for two days in 2013. Sometimes they are held over 2 days, sometimes just one day.

Do you find that you are reaching those community members that rarely come to the usual Latvian events?

Absolutely! I just love the fact that we involve several generations of learners and presenters, from all walks of life and levels of “Latvianness”. Some participants are well known members of the Latvian community, some are very rarely seen, some are friends or partners of Aussie Latvians. It is great to have people come in and admire Latvian House and see how fabulous and fresh it looks, and how busy it is, particularly on a Saturday.

Why do you think they find you?

If you mean how do we advertise: we use notifications in both the Latvian newspapers here in Australia, we place fliers in all the places where Latvians congregate, but quite frankly, the best form of advertising has been Facebook. News seems to spread like wildfire. We had most of our bookings secured within hours of first posting the event!

If you mean why are people attending: I think there is a growing interest in old school skills. It’s great having the instantaneous pleasures of the digital world. But there is something uniquely satisfying by seeing something evolve using your own hands.

I also think that people are searching for an identity. The Latvian applied arts are very attractive, ancient and they contain a lot of symbology. Exploring their Latvian roots through the ancient crafts, allows people to learn about their own heritage in a practical, but personal way. As you sit and plan your item, or go through the steps required to create it, you feel a direct link to the many, many people who developed the process over the eons before you.

What has the response been like – comparing the three years? Do you feel that holding the event annually is often enough? Is interest waning or growing?

This movement sure is growing! I presented a speech at the Latvian Culture Festival in Adelaide on Latvian Jewellery and Symbology in 2012 after which I surveyed the public on their perceptions of the future of Latvian applied arts in Australia. I was shocked to find that the overwhelming majority thought that there was a great past, but no future, and even no present! The subsequent work of the Australian Latvian Artisans’ Guild has reanimated the movement. Each year we have had more interest from both artisans and participants. We had 14 artisans and 32 learners at the last workshops. That’s pretty amazing, I’d say!

I don’t think we will hold the event more often than once a year. The event is a huge ask for the artisans involved. I think it takes a year for the energy to rebuild!

You know what is interesting? Many of the artisans insist that they are not artisans, that they don’t know enough. But they come along, and see that they do know a lot more than anyone else in their field. They see that the learners are so keen, that the atmosphere is great and they enjoy themselves. They do a little more learning and a little more research, and the next year they are starting to accept their title! I think that’s why we are growing. We are just a bunch of inclusive and accepting people sharing our knowledge to the best of our abilities.

There is a Latvian Cultural Festival scheduled for the end of the year in Melbourne. Will the Handicrafts Association be hosting an exhibition or workshops during the Festival?

Yes! But don’t call us “Handicrafts”. That reminds me of crocheted toilet roll covers. We are artisans!

Our group is organizing an exhibition of Latvian applied arts as part of the Australian Latvian Culture Festival. We are proud to have involved important artisans from both Australia and Latvia. The idea behind the exhibition is to showcase works which reflect Latvian culture past, present and future. There will be plenty of local artists on display, but we will feature world reknown textile artist India Flint, who is creating an installation specially for this exhibition, as well as award-winning Rīga Master Weaver Māris Maniņš, who will be bringing works from Latvia. There will also be an artisans’ market and a place to put your feet up and enjoy the atmosphere. The exhibition will take place at the home of the Daugavas Vanagi (Latvian Relief Society) 87 Chetwynd Street North Melbourne, every day 10am – 4pm, 26th – 31st December 2016.

How and why did you get involved in handicrafts?

I have always had an artistic talent. I wanted to be artist, but my mum talked me out of it. She said there was no money in being an artist and I could always go back to art later. She was right. I’ve had a great career in education, and now I’ve retrained and run a small business as a jeweller, called Vasara, making Baltic-inspired jewellery.

I’m glad I’m not trying to earn a living from making hand-made jewellery. I think all our artisans suffer the same problem. People like individual, authentic and handmade, but they don’t grasp how many hours are involved.

Give us a bit of an idea of how these workshops are run (the format).

The artisans prepare materials, samples, masters and tools at home and arrive with carloads of gear. We arrive at 8am and set up for 2 hours. Participants arrive at 10am and work through until 4pm. Then the artisans clean up (we got lots of help last time from the participants, thanks!) and pack up. Almost the biggest task for me is retooling my studio at home after the event.

If it’s a Saturday, we make use of the wonderful fare at the Latvian House café. If it’s a Sunday, we provide food and refreshments. That way we don’t lose time and people to going off in search of sustenance away from Latvian House.

The artisans are just marvellous. They donate their time, knowledge and use of their tools. All money raised goes to further our projects and buy materials for the workshops. No money goes to the artisans themselves: what cultural heroes!!

At the last workshops we offered our participants the opportunity to try their hand at a craft at the very reasonable rate of $40 per day including all materials (except sterling silver and some specialist woods).

Thanks for the interview!