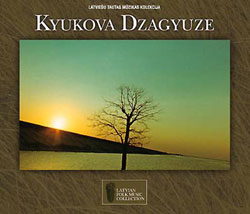 Laiksne specializes in the music of eastern Latvia, and all of the songs on Kyukova dzagyuze (The Cuckoo Called) are sung in the Latgallian dialect. None of the singers is a native speaker of the dialect, but they do a good job. They have employed linguistic consultants, as well as specialists in traditional singing and music, and the result is a very professional recording.

Laiksne’s style of singing is not "rough." It is not the almost-shouting style of singing that some people associate with songs in dialect. The five young women (Lauma Garkalne, Dina Kalniņa, Dace Prūse, Baiba Suško and Vineta Romāne) are all very strong singers with rich, beautiful voices. If you happen to have heard Bolta eimu, the third album in UPE’s Latvian Folk Music Collection featuring the music of Biruta Ozoliņa, then you will understand when I say that Kyukova dzagyuze sounds much like Biruta Ozoliņa times five—and turned up a notch or two in volume and in the variety of instruments.

The recording begins with "Zynu, zynu brūļu sātu," a dreamy song that does not mention the namesake of the album, the cuckoo, but speaks nonetheless about the heartache a grown daughter has for her childhood home.

The album is built around the theme of the cuckoo, a bird that is associated with sorrow, heartache and ill fortune in Latvian—and especially Latgallian—folklore. The cuckoo motif shows up in funeral songs, but also in many wedding songs, because marriage was thought of as a type of death (the woman left a relatively carefree life with her family and was "reborn" into a harsher life as a young wife in her husband’s home). Kyukova dzagyuze focuses on these wedding songs referring to the cuckoo. They are a very appropriate theme for a group of young women, and Laiksne has selected the songs and arranged them very well.

Laiksne is usually considered a "post folklore" group, but they’re not rocky, plugged in or too far out there. In fact, despite the careful arrangements, I would consider their music quite traditional. The accompaniments are heavy on the kokle, the ancient Baltic stringed instrument, but Laiksne also play violin, whistles, bass, drum and bagpipe. A cool switch from major to minor key in "Tev mōseņ zeile vēsti nese" caught my ear as something unusual, but otherwise the harmonies and arrangements do not travel far from the Latvian singing tradition.

For the most part the Kyukova dzagyuze songs are not well-known, but they definitely grow on you and provide for good and beautiful listening.