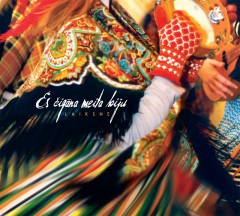 Besides releasing similar albums, there are other parallels between Laiksne and Vecpilsētas dziedātāji. Both groups feature a large number of female members, nearly all of whom sing, so vocal harmonies play an important part in their music. Laiksne have more of a history, now being a veteran ensemble celebrating their 20th anniversary, and Es čigāna meita biju is now their fifth CD release.

One of many things that made Putra such a memorable folk release was that, besides containing performances of lesser known folk songs, Laiksne imbue their songs with energy and humor, creating records that are simply fun to listen to. Es čigāna meita biju is no different, and the album reveals the variety and vividness that can be found during the winter solstice time, which perhaps is slightly ironic, considering this is the darkest time of the year (listen to, for example, the very subdued winter solstice album Totari by Iļģi, which makes for a sharp contrast).

The group’s skill with harmonies and arrangements appears on the song ‘Ai, bagāti Ziemassvētki’, an a cappella arrangement of the traditional folk song – all throughout the song there is the repeated mantra-like ‘Ziema, ziemassvētki’, and, over the course of the song, more and more voices join in, giving the song a very rich vocal performance. After the climax of the song, the voices depart one by one, perhaps like the slow departure of the budēlīši (roughly translated as mummers, much like ķekatnieki, masked visitors that travel throughout the village during the winter solstice).

A more modern arrangement of these ancient folk songs can be heard in the Latgallian song ‘Svātki guoja’, a driving, trance-like performance, with the solstice refrain ‘Kalado’ repeatedly chanted, with an almost hypnotic result.

The humor and enjoyment of the winter solstice can be found in the song ‘Labvakari, saimeniece’, a story of the mummers finally finding a place to rest and eat, after wandering and shivering the entire night. Sadly, there is no meat to offer them, as the children have already eaten all the meat and left only the bones in the pot, so the mummers continue on their journey.

Čigāni (normally translated as gypsies or Roma, though can also be roughly translated as ‘mummers’ in the context of these songs) are known not only for their colorful clothes, but also for their active songs with creative refrains. For example, in the song ‘Es čigāna meita biju’, a gypsy girl flirts with the boys while the rest of the mummers steal sheep, all the time singing ‘Aidā tidra kudra, aidā dīdā, ai duhaidā, ai fir lir lir, ai jumpidralalā’.

It is also worth noting the excellent production work on this CD, recorded at GEM studios and produced by Gatis Gaujenieks (not only an instrumentalist in Laiksne, but also bass guitarist and vocalist for Iļģi), as the songs have a fantastic sound and the production is quite crisp, especially the clarity and brightness in all the voices.

The CD booklet contains the lyrics to all of the songs, notes on the songs in English, as well as a brief explanation of the winter solstice season in both Latvian and English.

Though this time of year is dark and cold, Es čigāna meita biju offers a way to brighten up these gloomy days, with festive songs. Reaffirming their place as one of the premiere Latvian folk ensembles over their twenty year career, Laiksne reveals the multi-colored facets of the winter solstice time over the course of the album. Much like the spirited journey of the ķekatnieki, Es čigāna meita biju offers a vivid and memorable picture of the winter solstice season.