Latvian satirical and irreverent group Labvēlīgais tips, seven years after their last album Kurvis (or ‘Basket’), returned in 2017 with the follow up, appropriately titled Kaste (or ‘Box’).

Kaste, their eleventh studio album, collects fourteen songs in the group’s inimitable style, again finding inspiration in topics that at first may seem mundane and ordinary, but, upon a closer look, they still find the comic elements in these everyday occurrences and situations.

Labvēlīgais tips still display as much energy as when they started out, almost a quarter century ago, even with their seemingly commonplace topics, such as receiving lots of boxes in the mail in the song ‘Kaste’, or the contradictory need to be both brutal and romantic when wooing a woman in the song ‘Brutāls un romantisks’, or love driving one to madness in ‘Du bist spazieren’.

Otherwise the lyrics of the songs on Kaste are even more opaque and full of non-sequiturs than usual, making any kind of lyrical analysis impossible. Perhaps that is the point, as the group has always insisted there is no deeper meaning in their songs (though some might say that there is no meaning at all). This is made even clearer on songs like ‘Frāzes’, which is partly just common small talk phrases gathered together to make for a (rather uninteresting) song.

That is not to say there aren’t quite a few bright spots on the album – for example the bouncy ‘Ciemos pie malkas’, the catchy ‘Ciema aristokrāts’, or the low-key and dreamy ‘Bilbao’ are among the stand out tracks on the album.

One might have thought with seven years between studio albums allowing for a bit of creative battery recharging, the group would have come back with a set of stronger songs. Particularly when considering that Kurvis was a late career highlight for them, and perhaps even their best album. However, the songs on Kaste, though containing the right ingredients and their trademark irreverent attitude, are simply not as strong as on other albums. Their most memorable songs have always been the ones about what might otherwise seem uninteresting – like a ride on a slow tram, a bus driving into someone’s garden, or a boisterous crowd at the Song Festival. However, the songs on Kaste rarely make much sense, and aren’t as catchy as their songs in the past. The group’s songs have been a bit of hit and miss throughout the years, particularly in their earlier career, when they were putting out a new album every year.

While Kaste may not reach the memorable heights of previous efforts (which is a bit of a surprise, considering how strong their previous album Kurvis was), the album still has many flashes of what makes Labvēlīgais tips one of the most endearing and enduringly popular of Latvian ensembles. The irreverence, often nonsensical lyrics, and general good humor in their songs have been their trademark, and Kaste does not diverge from that formula at all, though perhaps the songs embrace that formula too closely. Though there are a few occasional glimpses of brilliance, as a whole, Kaste is not one of their stronger efforts. 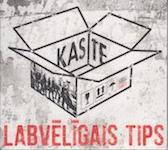