Singer, songwriter and multi-instrumentalist Kaspars Dimiters recently celebrated his 60th birthday. To mark that occasion, he released the career spanning collection Ielūgums uz dzīvi in 2017, a collection of one hundred songs recorded over his many decades of activity. The collection certainly reaffirmed Dimiters’ place as one of the truly great Latvian songwriters.

However, Ielūgums uz dzīvi should not be considered to be a sign that the songwriter is slowing down. Dimiters continues to actively write and record songs, and, in 2018, he released Ievainotie, a double album of new songs (though it does include a few tracks that were included on Ielūgums uz dzīvi).

The themes and mood of Ievainotie (or ‘The Wounded’) can already be sensed when viewing the stark, blood-red cover of the album. Indeed, this collection of songs veers more towards the personal (rather than the political), and has many elements of pain and personal hardship, though still tempered with the occasional hopeful, even cheerful moment. Overall, though the album does deal with the ‘wounds’ we receive in life, there is the possibility to survive all of this with the help of love and spiritual assistance and guidance.

Certainly, there are still songs that are critical of Latvian society, as well as what he considers to be potentially dangerous and treacherous trends, including the broad indifference that he sees in many. The song ‘Dzīvnieku dziesma’ has a long list of common complaints in Latvia, such as small pensions and wages, politicians, the media, poor teachers, all of which have been blamed for the difficult state that Latvia has been in since regaining independence. Dimiters counters that by saying that this is the price of freedom, and this freedom released many savage, animalistic elements within people, who have abandoned both civility and God. A similar warning is presented in ‘Ūdens ir pienācis slieksnim’, where he postulates that society has reached a point of no return, and how ubiquitous technology, though it may bring people together virtually, is doing significant harm socially.

Though most of the songs are of a relaxed and somber nature, there are still moments of liveliness and even levity, as can be heard in the song ‘Meža elektriķis’. The slightly absurd yet humorous song about replacing pine cones in the forest with light bulbs perhaps reveals Dimiters’ beliefs in the power of nature. One does wish that there were more songs like this on the album though, as this offers a respite from the often dour songs on the album.

Dimiters offers a requiem for the Latvian lats ‘Balāde zilbei’. The lats, which was removed from circulation twice (once after Soviet occupation, the second more recently when it was replaced by the Euro), was and remains a symbol of Latvian sovereignty. The five lats coin was a symbol of hope during the occupation, and Dimiters song is about how this one syllable contained much of Latvia’s strength, and, though it has been since replaced, the power in this one syllable remains.

The album concludes with the gently flowing ‘Vingrotājs aleluja’, which, at first glance is a curious song about a gymnast that sings ‘Hallelujah’, but, like many of Dimiters’ songs, is influenced by Christian texts and beliefs, and this song was inspired by the phrase ‘train yourself for godliness’ (from 1 Timothy 4:7). The song could even be considered hopeful, with its message that perhaps if we strive to be better, things may very well start improving.

Though now entering his seventh decade of life, Kaspars Dimiters shows no sign of slowing down, as the twenty-five songs on Ievainotie will attest to. Dimiters still has much to say and is as loquacious as ever, as many of the songs have a dozen or more verses. Though certainly, overall, a mellow and somber collection, perhaps indicating that Dimiters himself has mellowed, but Ievainotie still does contain many songs that are deeply, perhaps even uncomfortably personal, and Dimiters perhaps wisely avoids some of the more controversial and provocative, if not alienating, themes and thoughts he has expressed in some of his earlier songs. As a result, though often bleak, the album is one of Dimiters’ most satisfying works, and could be considered among his most seminal albums like Mans kumoss pilsētas baložiem and Krusta skola. Ievainotie confirms Dimiters’ status as one of the premiere songwriters in Latvia. 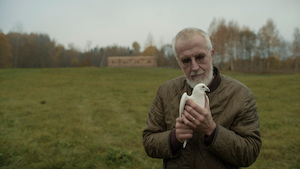