Many Latvian youngsters who go to study to USA are surprised to face unexpected problem, a legal drinking age of 21 years vs 18 in Latvia. College years are traditionally a time for drinking and partying, in every country of the world. So what young people do in this situation? They buy fake identification documents online! For most students in America, fake IDs is a rite of passage, same as initiation to fraternity or sorority, but obtaining and using forged document can have serious legal consequences. Even being aware of potential troubles with the law, underage people still go online to King Of Fakes website, where they can obtain a ready, real looking fake ID. This is an alarming social issue that requires serious consideration.

Ilona Meija is one of Latvia’s premiere flute performers. In her career, she has played with orchestras such as the Latvian National Symphony Orchestra, Sinfonietta Rīga as well as given many chamber music performances. It is in fact chamber music that is closest to her, and, due to that, Meija, along with distinguished pianist Dzintra Erliha, recorded an album of Latvian chamber music for flute and piano. Entitled Citādas krāsas (or Other Colours), the album was released in 2016 by the Latvian national record label Skani as part of their series ‘Latvian composers’.

The album displays a broad range of compositional styles and eras, covering almost eighty years in Latvian classical music, from the mid-20th century to modern times. Being just two instruments, the intimate nature of this music is apparent with the first track, composer Lūcija Garūta’s ‘Nāras dziesma’ (Mermaid’s Song). The work, composed in 1928, was originally intended as a vocal work, but is perhaps even more effective as an instrumental performance. The mystic being is presented in both a playful and energetic manner, with both light-hearted and serious moments. Erliha has long been an enthusiastic interpreter of Garūta’s works, and recorded a number of them for her 2008 album Zvaigznes skatiens.

Meija’s flute expresses a great longing and sadness in Jānis Mediņš’ work ‘Rapsodija’ (Rhapsody). The composition, written in 1945, not long after Mediņš went into exile in Sweden during World War II, quotes Latvian folk songs extensively, and one will hear passages from songs like ‘Pūt, vējiņi’ and ‘Skaisti dziedi, lakstīgala’, among others, woven together. Though there is a melancholic mood to the work, especially considering he recently had to flee Latvia, the work ends on an up-beat note, perhaps reflecting Mediņš’ wish for the listener to have hope during those dark times.

Among the more recent compositions is Anitra Tumševica ‘L’air et la lumière’, written in 2010. The work is in an experimental vein, and uses effects like Meija simply blowing air into the flute (creating a breathing-like effect) as well as simply tapping the flute keys for a kind of rhythmic effect. The work, which alternates between calm, meditative sections and sharp, crashing chords, was inspired by the works of Garūta and French composer Olivier Messiaen, and Erliha is particularly adept at interpreting this work (her previously mentioned CD Zvaigznes skatiens also included her interpretations of a number of Messiaen’s piano works).

Modern chamber music is also represented by composer Santa Bušs and her work ‘TransparenT’ for solo piano. The work begins with Erliha playing the piano strings themselves, and, over the course of the work, using the varied sounds of the piano to create a sonic portrait of the nature of Sardinia. The work was composed for Erliha, and took inspiration from the syllables of her first name – ‘dzin’ (to sound like a bell) and ‘tra’ (trill) – and uses these effects to form a compelling sonic tapestry.

The album concludes with Latvian American composer Dace Aperāne’s ‘Daina’. The work, dedicated to both Meija and Erliha, was inspired by Latvian folk song texts about the sunset and sunrise. Though the work is brief (just over two minutes in length), in a short period of time the artists present a lyrical and colorful landscape, with Meija’s flute providing the ‘fine silver’ (sīku sudrabiņu) of the folk song text.

The CD also includes works by composers such as Imants Zemzaris, Pēteris Vasks, Pēteris Plakidis, Artūrs Grīnups and Maija Einfelde, and has extensive liner notes on the performers, the composers and their compositions in English, Latvian and French.

Meija continues to actively perform with Sinfonietta Rīga, and among their many concerts in 2018 will be a stop at the Baltic Sea Festival in Stockholm in August. Erliha will join singer Maija Kovaļevska in a number of international performances, including stops in Australia in April and May, and in the United States in September and October.

Ilona Meija and Dzintra Erliha bring their immense flute and piano talents together and present an engaging and immersive spectrum of colors on Citādas krāsas. Presenting a wide array of styles and sounds, the artists have gathered some of the most notable and memorable works in Latvian chamber music, revealing many nuances and depths in these compositions. The national label Skani continues to present both the best performers and composers in Latvian classical music, and these two artists have created a valuable and essential collection. 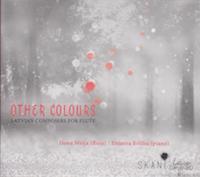