Riga was one of the European Capitals of Culture in 2014, and one of the most ambitious projects during that time was Dzintara ceļš, a collection of new choir works performed by the State Academic Choir Latvija, conducted by Māris Sirmais. The theme of this collection is the Amber Road, a trading route, dating from Roman times, where amber from Latvia (and other places) would make its way all the way south to the Adriatic Sea. This collection follows the Amber Road through modern day Europe, with a composition from each nation along the way (compositions are all by Latvian composers). The twelve compositions on this collection begin with Latvia, then move south through Lithuania, Russia, Poland, Ukraine, the Czech Republic, Austria, Hungary, Montenegro, Italy, Turkey, and finally Greece. The text for each composition is from a poet of that particular nation, and they are all sung in their native languages.

This is not the first choir project with amber at the center of its theme – it follows Amber Songs by the Youth Choir Kamēr… released in 2014, though that collection had international composers arranging Latvian folksongs. These two projects being performed almost consecutively is perhaps a coincidence, or perhaps not at all – Māris Sirmais was the longtime conductor of Kamēr… and left an indelible impression while he was there.

Composer Ēriks Ešenvalds provides the music for the Kārlis Vērdiņš poem ‘Dzintara acis’ (Amber Eyes), a work that is uncharacteristially dark and disturbing for the composer. Vērdiņš’ poem reflects on Assyrian king Ashurnasirpal II (who supposedly had a statue of Baltic amber among his possessions). The poem is full of violent imagery, as the king was well known for his cruelty. The music is equally tormented, with eerie whistling over the ominous male voices, singing about the building of his capital city Kalhu, from where he views the Baltics through his amber eyes.

One of the most encouraging aspects of this collection is that so many works were entrusted to younger composers. Latvija has always been in the forefront of working with new composers and providing a stage for their works to be heard, and these compositions are no exception. One young composer who has begun to make a name for himself in Latvian choir music is Jēkabs Jančevskis, and his contribution is the Polish ‘Odpływ’ (poetry by Tadeusz Dąbrowski). Featuring the soaring soprano solos of Irīna Rebhūna and Sanita Sinkēviča, with the rest of the choir providing ocean sounds, Jančevskis forms an impressive musical tapestry that provides both a mysterious and unearthly aura to the Polish poetry.

Among the many veteran Latvian composers represented here is Juris Vaivods, and his contribution is the music for ‘Ruka’, a poem by Petr Borkovec from the Czech Republic. The supernatural poem paints an image of the narrator’s arm and hand turning to amber when returning to the table of a dying friend. The horror of this is reflected in the music, with ‘Ruka’ reaching a cataclysmic crescendo at that point. However, the work then begins to resemble a canon, where the voices begin at different times to repeatedly sing about needing to see the doctor about the amber arm. The work closes with the soothing words ‘těším se’ (I am looking forward to it).

Composer Juris Ābols considers himself a ‘Dadaist’, and his compositions are almost always quite strange and bizarre. Ābols’ music for Salut au Monde! (based on the poem ‘Providna porodica’ by Montenegrin poet Dragana Tripkovič) is no exception. The work mixes English, French and Serbian texts, and over all of it is a spoken word narration (barked in military style by Uģis Meņģelis) based on writings of Russian astronaut Yuri Gagarin (though, oddly, and for Juris Ābols – appropriately, the narration is in English). The singing and narration give the song an other-worldly feel, like a vision from outer space.

Undertaking such an ambitious project, fraught with potential difficulty (composing music for poetry that is not in the composer’s native language, and potentially in a language the composer does not understand at all, is a particularly daunting challenge). In the hands of anyone else besides conductor Māris Sirmais and the State Academic Choir Latvija it may have resulted in a confusing mess. It is true that this collection features some very modern and difficult choir music, which demands a world class choir like Latvija to be able to perform it (and to sing in twelve different languages). However, the Latvian composers, both young and veterans alike, have risen to this challenge and have produced a collection of choir compositions that are unique and memorable, and, in most cases, true to the spirit of the text. It will remain one of the most memorable musical projects from Riga’s time as European Capital of Culture. 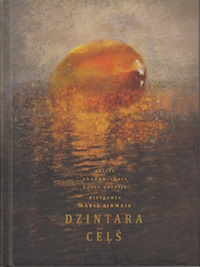