One of the most notable events in recent years in Latvian folk music has been the debut of the ensemble Tautumeitas. As their name implies, the group gathers together six ‘folk girls’ who perform songs inspired by Latvian folk songs and folklore. Their first recording, Lai māsiņa rotājās!, was performed together with the drum and bagpipe ensemble Auļi, and the group’s proper first debut album, simply entitled Tautumeitas, was released in 2018.

In just a few years, the ensemble has become one of the best known and most popular folk ensembles, and have even appeared in a commercial for the Latvian national airline airBaltic. The members of the group are Asnate Rancāne (violin, voice), Aurēlija Rancāne (drums, voice), Ilona Dzērve (accordion, voice), Lauma Bērza (violin, voice), Laura Liepiņa (percussion, voice) and Laura Marta Arāja (percussion, voice). The album also features additional musicians and instruments, such as brass instruments and cello. Integral to the album’s sound is also producer, percussionist and arranger Reinis Sējāns.

Though they use many elements from Latvian folklore in their songs, it is still a thoroughly modern album, and one might consider the songs to be a kind of ethno-pop style of world music.

As all six members of the group are singers, it is then no surprise that the vocals are the main focus for the musical offerings. The importance of singing is echoed in the first song, the appropriately titled ‘Sadziedami’, where the powerful vocals are supported by a thunderous musical accompaniment while the ensemble sings ‘sadziedam mēs, māsiņas’ (let’s sing together, sisters!)

Inspired by the Krustabas ritual (or Latvian folk Christening), the song ‘Pāde’ is a song about self-growth. The ritual of the ‘pādes dīdīšana’, where the one being christened is passed around in the arms of the invited guests, is meant to pass along positive thoughts from the guests. In this song, as with many of their songs, Tautumeitas use the mystical aspects of Latvian folk rituals to create a richly layered song, with help from Reinis Sējāns, who provided the arrangement.

Though much of the album is energetic and exuberant, there are moments of calm and tenderness, such as in the song ‘Pelīte’, a soothing, entrancing lullaby. The song tells of a mystical mouse that brings sleep to small children, and shows that the ensemble are equally versatile in both more active songs, as well as calmer and more peaceful songs like this one. Similarly, the somber ‘Raudi raudi’, a song about a boy crying, as the maiden will not come to him, is one of the album’s more intimate moments.

Other highlights include the rhythmic ‘Aiz azara’, sung in the Latgallian dialect, the catchy and infectious ‘Dai citas meitas’,  and the mystical, almost ritualistic ‘Raganu nakts’, a vibrant song about witches travelling the land during Midsummer.

Vibrant and vivacious, Tautumeitas’ debut album is both enjoyable and refreshing. With their powerful voices and harmonies, the group has established themselves as one of the premiere ensembles in Latvia. Combining elements of Latvian folklore with modern elements, the ensemble has woven together an engaging collection of songs.

Latvian folk singer Asnate Rancāne has, in recent years, become one of the most prominent folk performers in Latvia. Though known best for her work for the ethno-music group Tautumeitas, she works with a wide variety of ensembles, lending her voice and talents to projects such as Op. 2 with double bass player Stanislav Yudin and the new recording of Uģis Prauliņš’ Pagānu gadagrāmata with the men’s choir Gaudeamus.

Perhaps it is no surprise at all that she should be so active in the Latvian folk music scene – she comes from a singularly talented family of folk performers. Gathering their copious knowledge of folk music, as well as musical and arrangement skills, the family came together to form the group Lata Donga and released their debut album Variācijas in 2018. The group’s name is formed from the Sanskrit word ‘lata’ (which can mean ‘flower’ or ‘girl’) and the Latgalian word ‘donga’ (meaning ‘corner of a room’), which is appropriate, considering the feminine nature of many of the songs on the album. Asnāte Rancānce is joined by sister Aurēlija Rancāne (also of Tautumeitas), as well as mother Aīda Rancānce and father Andris Kapusts.

The album title Variācijas (or ‘Variations’) is also quite appropriate, as the ensemble performs songs from many different regions of Latvia, as well as in a multitude of styles – presenting both traditional and modern arrangements. The result is a broad spectrum of Latvian folk music, performed authentically and with deep conviction, as befits a family that has been immersed in folk music and traditions for generations.

Traditional elements can be heard in songs like the vibrant ‘Cel vārtīnus’, with its lively kokle introduction, as well as ‘Lineņi’, which captivates with beautiful harmonies.

The album also includes midsummer songs, such as the powerful ‘Es leiguti’, an a capella arrangement that features vocals from all the family members, which is then followed by the meditative ‘Juoneits guoja’. The song, enhanced by the synthesizers of Uģis Vītiņš and double bass of Stanislav Yudin, is of a more mystical and spiritual nature, with an almost dreamlike quality.

‘Ganu dziesma’ is an immersive atmospheric sound landscape, meant to convey the songs of shepherds as they herd their flocks, calling to each other from a distance. The arrangement is supplemented by the eerie sounds of the zvanga, played by Tobias Illingworth as well as Yudin’s double bass.

World music influences, particularly Middle Eastern sounds, can be heard in the driving ‘Sastdiņ guoju’, an almost trance-like pastiche of various elements, and also includes traditional instruments, such as the darbuka, performed by Asnate Rancāne. In a similar vein is the song ‘Zaļā suodeņā’, which features the sarod, an Indian stringed instrument performed by Sergejs Ancupovs.

The album concludes with perhaps the most modern arrangement, that of the song ‘Tumša nakts’ (which is a variation of the well-known Latvian folk song ‘Tumša nakte’, but with slightly different melody and words), dramatically sung by Kapusts and Illingworth, with Kapusts also playing the bagpipes. Featuring extensive use of synthesizers (provided by keyboardist and arranger Uģis Vītiņš), this sweeping interpretation brings the album to an epic conclusion, with this song about travelling a dark night with one’s horse, but with broader themes of mortality and eternity.

The Latvian Academy of Culture Mixed Choir Sõla is one of the premiere amateur choirs in Latvia. Praised not just for their technical skill, but also their nuanced and artistically rich performances, the choir has achieved success and renown not just in Latvia but worldwide. The choir was one of the finalists in the European Grand Prix choir competition in 2017, and were also the guest choir and the 2017 Latvian American Song Festival in Baltimore.

Much of the success and recognition that the choir has achieved can be attributed to lead conductor and artistic director Kaspars Ādamsons, who, with his boundless energy as well as deep appreciation and understanding of music, inspires his singers to achieve greater and greater heights. Ādamsons was the conductor for two of the songs at the 2018 All Latvian Song and Dance Celebration closing concert at the Mežaparks amphitheater – the joyful and vibrant folk song ‘Gaismeņa ausa, sauļeite lēce’ and the somber, powerful ‘Tavas saknes tavā zemē’, which displayed his versatility and skill as a conductor.

The choir celebrated their 20th anniversary in 2018, and, to mark this occasion, released a two CD album entitled Dziedot dzimu, dziedot augu. The goal of this collection is to spotlight the diversity and variety of Latvian composers throughout the years. The collection contains a total of twenty songs, and, to highlight the geographic areas of Latvia, four composers were selected from each of the geographic areas of Latvia – Kurzeme, Zemgale, Vidzeme, Latgale, as well as Riga. Additionally, to add a layer of complexity to the calculus, ten of the songs are folk song arrangements, while ten are original works. Using these requirements to select the works included in the collection has resulted in a truly diverse collection of songs by composers both well-known and less familiar. Ādamsons, along with assistant conductors Laura Štoma and Artūrs Oskars Mitrevics, have created a comprehensive and compelling document of Latvian choir music.

One of the benefits of the constraints set by the choir for the included repertoire is that it allows for some less well known composers to be represented on the album. Listeners will have the opportunity to become familiar with composers such as Ainars Plezers, who provides an arrangement of the folk song ‘Trīs sidraba upītes’, full of undulating harmonies, as well as Solvita Ivanova, who provides a wintry scene in ‘Bij dziļa ziema’, creating a snowy musical landscape with poet Rainis’ text.

Some of the composers have a limited link for their corresponding region – for example, Canadian Latvian composer Imants Ramiņš is included as one of the composers from Kurzeme (indeed, the composer was born in Ventspils, but he and his family fled during the war when he was just one year old). However, this allowed for the inclusion of Ramiņš’ arrangement of the folk song ‘Pūt, vējiņi!’, which is one of the most beautiful modern folk song arrangements. The gentle, constant flow of the song as it builds to a crescendo provides for a stirring interpretation of the song.

Though all the composers represented are from Latvia, not all of the songs are in Latvian, for example Ēriks Ešenvalds’ ‘Only in Sleep’. This slightly sentimental song is elevated by soprano Laura Štoma’s soaring solo, displaying Ešenvalds’ talent for creating memorable melodies. The spiritual ‘В начале было Слово…’ (In the Beginning was the Word) by Pēteris Butāns balances a mysterious, mystical introduction with a tormented prayer for mercy.

Perhaps the most momentous performance on the album is the choir’s rendition of Pēteris Vasks’ ‘Mūsu māšu vārdi’, a work nearly ten minutes in length. As with many of Vasks’ works, the work is full of dramatic tension and conflict, as well as themes of nature – the titular mothers of the Māris Čaklais poem are birds. The work concludes with the choir providing birdsongs, representing birds nesting in the trees.

The CD booklet contains extensive notes on the composers and compositions by musicologist Orests Silabriedis in both Latvian and English, as well as the texts and translations for all the songs. In a charming touch, the booklet also includes both recent and childhood photos of all the choir members.

Over the course of its twenty songs, Dziedot dzimu, dziedot augu provides for a vivid panorama of Latvian choir music – well-known as well as lesser known works and composers, folk song arrangements and original compositions, covering a broad musical spectrum of nearly 150 years of Latvian choir music. The choir Sõla, guided by their indefatigable and inspired conductor Kaspars Ādamsons, again confirm their status as one of the top amateur choirs in Latvia, with their technical ability complemented by their emotionally and artistically rich interpretations. 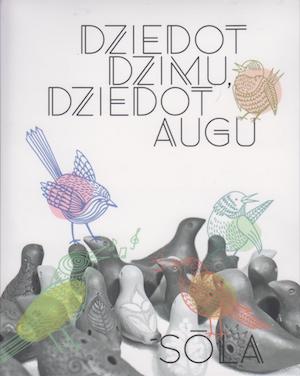