The Carion Quintet, a woodwind quintet that brings together musicians from Denmark, Hungary and Latvia, has been performing together since 2002, and, in their fifteen year history, have become one of the premiere wind quintets worldwide. Though they have been active recording artists, up until recently, their recordings were focused on Danish composers. However, in 2017, after encouragement from the Latvian national record label Skani, the ensemble recorded an album of works by Latvian composers. Entitled Northwind, it gathers recordings of works by Imants Zemzaris, Pēteris Plakidis, and Pēteris Vasks. The album is part of the Skani series celebrating the Latvian centennial.

Carion is formed from the following musicians – Dóra Seres on flute, Egils Upatnieks on oboe, Egīls Šēfers on clarinet, David M. A. P. Palmquist on horn, and Niels Anders Vedsten Larsen on bassoon.

The compositions on this CD were all written in the period between 1975 and 1985, a period when the Woodwind Quintet of the Latvian National Symphony Orchestra was actively performing and inspiring artists to compose for them. It was also a time of artistic upheaval (some small creative freedoms were being allowed by the Soviet authorities), and the works display a number of different styles and approaches, even though they were all composed in a similar period of time.

Composer Imants Zemzaris wrote ‘Four Preludes on a Theme by Alfrēds Kalniņš’ in 1981, on the 30th anniversary of the composer’s death. The theme is one of Kalniņš’ sacred songs, and the result is melodic and spiritual. Zemzaris blends together both classical and more modern elements in the preludes, lyrically bridging the divide between the two eras with gently flowing melodies and harmonies, and all the various elements are beautifully rendered by the members of the Quintet.

Zemzaris also is represented by his work ‘Voice’, and, as the title would suggest, it is a composition for a single instrument, the voice of the clarinet. Šēfers provides a compelling interpretation of the piece, with its meditative and quiet beginning, which then grows and expands to cover the many dynamics and aspects of a voice, and with the jumps in tone, can almost seem like a conversation.

The late composer Pēteris Plakidis makes full use of all the instruments of the quintet in his energetic and driving ‘Prelude and Pulsation’, with its alternating short bursts of sound and longer and occasionally shriller tones creating a layered sonic painting. This is then followed up by Plakidis’ ‘Two Sketches’ for solo oboe, and Upatnieks’ expressive and nuanced performance makes for a memorable rendition of these works.

The album concludes with two works by Pēteris Vasks. The first is ‘Music for Fleeting Birds’, an aural representation of migratory birds in Latvia. Carion create a dramatic, ornithological landscape, as the birds gather and sing, and then depart in preparation for the coming cold winter. Each instrument has its own, unique birdsong, There is also a considerable amount of tension in the work, perhaps reflecting Vasks’ own interest in ecology and conservation and the threat to the birds from humanity and industry.

The second work is perhaps Vasks’ most tragic composition – ‘In Memory of a Friend’, a work dedicated to bassoonist Jānis Barinskis, who perished in a fire in 1980. The terrifying work, with its all too real depiction of rushing and rising flames in the instruments, then concludes with a despairing moan, as if to symbolize one’s final breath.

The CD is accompanied by extensive notes on Carion, the composers and their works in English, German and Latvian.

The Carion Quintet show themselves to be a truly talented and versatile ensemble on Northwind. Though the compositions were all composed over the course of just a decade, each one is stylistically different and unique, and Carion bring out the individuality and personal characteristics and inner beauty of each of the works. As a result, Northwind is an exceptional document of some of the most compelling Latvian chamber music to have been composed, and the Carion Quintet, with their innovative and resonant performances, has brought new life and energy to these works. 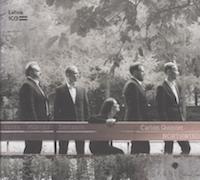