The Latvian Radio Choir has long been acknowledged as not just one of the most talented choirs in Latvia, but also one of the most versatile. Through their diverse repertoire, they have established themselves as a truly singular choir, one that can expertly perform even the most complex and challenging of works. Though their focus is mainly on the modern, and often experimental repertoire, the Latvian Radio Choir, conducted by Kaspars Putniņš, do still occasionally delve into the classic repertoire.

In 2013, the choir released the CD Diena aust, a collection of performances of choir works from the ‘golden era’ of choir music (the first half of the 20th century), and have now followed that up with 2017’s Daba un dvēsele, a similar collection of Latvian choir classics, released by the Latvian national record label Skani as part of their Latvian Centennial series.

Perhaps the most popular choir music composer of that era was Emīls Dārziņš, whose choir compositions remain beloved and frequently performed, as well as being a central part of the Song Festival repertoire, more than a century later. Though his life was tragically cut short, in a brief period of time Dārziņš composed a number of wondrous works. On this set, the Latvian Radio Choir provides memorable renditions of the mystical ‘Senatne’, the tender and sentimental ‘Mēness starus stīgo’ and the anthemic ‘Lauztās priedes’.

Composer Emilis Melngailis took much inspiration from Latvian folklore, and this can be heard in the four part ‘Latvian Requiem’, with texts by Vilis Plūdonis and Rainis. This somber, weighty work traces the final journey, through glades of ferns, to one’s final resting place. The cycle concludes with the fateful, ‘Pastarā diena’, a tragic and even violent musical setting of the End of Days. The Latvian Radio Choir create an absorbing and, at times, unsettling interpretation of this final journey.

The supernatural is on display in Jānis Zālītis’ ‘Biķeris miroņu salā’, a mystical tale of a goblet on the Island of the Dead that gathers anguished souls. The lyrical and delicate ‘Mežā nakts ir ienākusi’, with the expressive poetry of Jānis Jaunsudrabiņš, is Jēkabs Graubiņš contribution, and here the Radio Choir show their exceptional ability to bring forth all the tiniest nuances of a song to make for a vivid portrayal of night in a forest.

The bulk of the songs on Daba un dvēsele are by composer Jāzeps Vītols, whose monumental contribution not just to Latvian choir music, but Latvian music in general, cannot be understated. For his time, he was a prolific innovator in choir music, be in dainty miniatures like ‘Mēnestiņš meloja’ or the expansive Bible scene of ‘Dāvids Zaula priekšā’. Vītols also was inspired by Latvian folklore and legends, and many of his songs put music to fables, like ‘Rūķīši un Mežavecis’. His sweeping lyricism, captured richly by the singing of the choir, can be heard on songs like ‘Diena beidzas’ and ‘Saules svētki’.

The CD booklet includes extensive notes on the composers and the compositions in both Latvian and English, as well as English translations of all the lyrics.

In the CD booklet, conductor Putniņš compares the recording of these songs to writing a love letter – which is an appropriate metaphor, considering that many of these songs are now an inseparable part of the Latvian cultural canon, and have inspired many a musician throughout the years. Conductor Kaspars Putniņš and the Latvian Radio Choir have clearly imbued all of these performances with love and respect, and, as a result, Daba un dvēsele is an exceptional and inspiring collection. 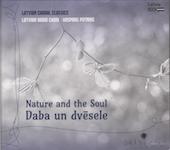