It has been more than three years since the first Apple iPhone was introduced in the Baltics. Not only has the user interface and phone technology been constantly improving, but Latvian language support has become even better and new Latvian applications ranging from reading Latvian newspapers, checking tram timetables to translating Latvian text and listening to a favourite Latvian radio station have appeared in the iTunes App store.

With the recently introduced voice-enabled iPhone 4S worldwide, Apple continues its streak of record-breaking sales. The upgrade of Apple’s tablet computer, the iPad2, earlier this year is also leaving its mark on enterprises by disrupting business models and restructuring IT departments. The industry has been affected so dramatically that manufacturers that once were dominant players are desperately seeking the ideal hardware and software combination to catch up in this transformational era of touch screen-based mobile computing.

For the estimated 40,000 iPhone and 5,000 iPad users currently in Latvia, both the iOS4 and iOS5 software upgrades introduced further Latvian language support.  The Latvian date format on the welcome screen is fixed and Latvian language purists now get the “ŗ” (or palatalised r) option by touching the “r” key for more than a second. iOS5 provides dictionary support for the Latvian language for the first time, however Latvian didn’t make the short list of languages used by Siri, Apple’s smart new voice recognition software introduced with the iPhone 4S.

Although the App store for the Baltics has operated since April 2009 it is only in the last 18 months that have we seen a flurry of new apps and new developers attracted to the platform. Among them is 15-year-old Kristers Jursevskis, author of the Doit app. Latvian newspapers and magazines are not wasting any time either by producing iPhone and iPad versions of their content. This is a boon for Latvians living abroad who still want to keep abreast of the latest news and gossip, but don’t want to have to wait up to a week to receive the paper version via snail mail. Dienas mediji offers the daily edition of Diena for only USD 11 per month. Dienas mediji has made a significant investment in its own customised reader application, which apart from the occasional hiccup with the display of photos is very easy to use. Downloading the daily issue normally takes only a minute or two.

Dienas mediji also produce an iPad only publication called piektDiena that includes news from the previous week, adds some weekly video footage by journalist Māris Zanders and is a little more interactive than the regular Diena PDF version. When it was first launched in June of this year the downloads were a hefty 220MB is size, but nonetheless were quick to download. Six months later and still with a free price tag Dienas mediji has managed to reduce the weekly edition to half the file size. However, this hasn’t helped reduce the network load and it now takes several attempts to download piektDiena successfully. Dienas mediji also offer Dienas Bizness (USD 30 per month or USD 2.15 per issue) and and iPad-only version of the weekly Lietišķā Diena (Zurnāls LD) at USD 99 cents per issue.

The Lilita publishing house has also been providing iPhone, iPod Touch and iPad versions of all of its magazines since earlier this year using the Zinio publishing platform. Magazines such as Copes Lietas, Kas Jauns, Pastaiga, Lilita, Geo, NEXT, FHM, Cosmopolitan, Latvijas Arhitektūra and Latvijas Būvniecība can all be enjoyed at the discounted price to the printed version. With the release of iOS5 and the new Newstand feature, Apple’s own publishing platform, it will be interesting to observe what Zinio and the others will do, because ultimately the user will want to visit only one place for all their subscribed newspapers and magazines.

Swedbank has led the way in providing a mobile banking application (Swedbank Latvija) enabling customers to check their account balance, view previous transactions, pay bills, transfer funds, check currency rates and perform many other useful tasks. It took a whole year before other banks offered similar applications—Rietumu banka with its iRietumu App and dnBNord (DNB Latvija) which became available on the App store earlier this month. SEB banka has Estonian and Lithuanian versions, but a Latvian app is yet to be seen.

Trans Riga, created by independent developer Kristaps Grīnbergs, presents the tram, trolleybus and bus timetables of Rīga in an easy to use interface on the iPhone. Clicking on the map icon displays the route in Google Maps which users can then zoom in for more detail. A useful addition to this application, especially for tourists not familiar with Rīga, is to determine the visitor’s current location and list all of the available nearby public transport. And what about train timetables as well as reporting on public transport delays in real time? Admittedly this would be difficult to do without the cooperation of the Rīga public transport authority, which currently does not release this kind of data.

Ardis Markss from E Forma has produced a simple, but effective educational application (Ābece) targetted at both pre-school children and adults to learn the Latvian alphabet. Each letter has been beautifully drawn and users can also click to hear pronunciation of each word.

One of the more active mobile application developers has been the Rīga-based Cube advertising agency led by Mārtiņš Dambis. Applications include a television programming guide (Lattelecom TV) commissioned by one of the leading cable and digital TV providers in Latvia (I would love to see this app also become a remote control for switching channels and selecting TV shows so that I can finally throw out the old remote); a Līgo song app (LMT Līgo Līgo) that at the shake of the iPhone can provide the words and tune to many Jāņi songs while celebrating the summer solstice; an events guide to this year’s Positivus 11 music festival; a live audio stream from the progressive radio station Radio 101 as well as a video stream to view what’s happening in the studio; and a shopping guide (Alfas dāvanas) from one of the largest shopping centres in Rīga to help users decide what to buy.

Inspired by the Alice in Wonderland app, Jānis Liepiņš has translated a Latvian folktale into English, added stunning illustrations with animation and adapted it for the iPad to captivate both young and old audiences. Liepiņš even pulled out all stops to make a YouTube video promoting the special King’s Daughters iPad interactive book. I am eagerly waiting for the Latvian version so that I can enjoy it together with my youngest son before bedtime.

The software development company Tilde, best known for its Latvian spelling, grammar and translation software, has released the Translation app that can translate whole sentences from Latvian to English, English to Latvian and Latvian to Russian. It is free, but you’ll need to be connected to the Internet via WiFi or 3G. airBaltic has an iPhone app (airBaltic) to view timetables and flight status, as well as access online check-in facilities. There is also a companion app for the airline’s frequent flyers (BalticMiles). CSN Test will help users prepare for the challenging 30 multiple choice questions presented in the driver’s theory exam; Latvian Nouns provides an instant reference to noun, adjective, numeral and pronoun declensions (apologies for the shameless plug); DPD LV allows customers to track shipments online from pick-up to delivery; Riga in Your Pocket puts its popular tourist guide on an iPhone (Riga) with updates on a regular basis; and the draugiem.lv app has revamped its user interface and removed the charging mechanism for iPhone users. As a fan of Latvian ice hockey I tried to retrieve the Dinamo Rīga app, but it seems that access to this could be restricted to the territory of Latvia, which leaves me no other option than to visit the real game next time I’ll be in Rīga.

To find the latest and greatest Latvian app, click on the flag on the right bottom of the iTunes screen and select Latvia. The iTunes Latvia store has been available since August. Another alternative is to regularly check Web sites such as mac.tunt.lv, which provides further links to macpasaule.lv and ipods.lv. Yet another option is to download the new app called “Lietotnes latviski,” the primary goal is to help manage one’s way through the plethora of new Latvian apps that are now appearing on a weekly basis. However, at the time of writing not all apps were included and updates have been sporadic.

This is by no means an exhaustive list of Latvian apps, but it gives an appreciation for the diversity now available. I look forward to the day when Latvian utilities, TV stations and government departments will open up their data to the community to pave the way for even more innovative and exciting mobile applications, no matter where one may be located worldwide. 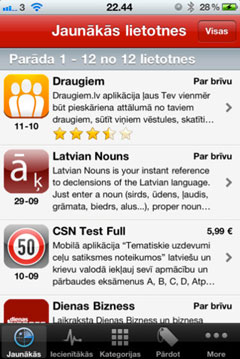 4 thoughts on “There’s a Latvian app for that”