It started back in September 2001 when Microsoft Latvia launched the first Latvian version of MS Word 2002. Then two years later MS Excel, MS Powerpoint and MS Outlook in fresh 2003 versions joined the suite and got the Latvian treatment as well. The latest version of the most popular office software for Windows, MS Office 2007, released just before Jāņi this year, has now gone all the way. Not only has the complete suite of applications (Word 2007, Excel 2007, Powerpoint 2007, Outlook 2007, Access 2007, MS Publisher 2007, MS InfoPath 2007 and MS Groove 2007) been adapted for the Latvian language, but the underlying operating system, more commonly known as Microsoft Vista, has learnt Latvian as well.

It seems like that in this latest localisation effort no stone has been left unturned. The control panel, online help, warning dialogs, informational messages—everywhere you look—using either Windows or the Office applications the local Latvian user can just about get by without knowing a single word of English. Even the printed guides and packaging are in Latvian. And no wonder, since this has been the largest localisation project in the Baltics to date and took the combined team efforts of Microsoft Latvia and the localisation company Tilde nearly 18 months to complete. The timing of the project presented challenges with work beginning as early as January 2006—more than a year before the release of Windows Vista itself. To add further pressure on the localisation teams, the effort had to be multiplied by three as Microsoft insisted that all three Baltic language versions be released at the same time this summer.

With more than 10 years of experience in localisation and technical translations Tilde was once again chosen to produce all three Baltic language versions. To deal with new concepts and terminology, Tilde also worked closely with the Latvian Academy of Sciences’ Terminology Commission. The results of that collaboration have now become available at the terminology Web sites www.termini.lv and www.eurotermbank.com.

It is welcoming to see that they have not always followed the current trends and simply adapted variations of the English terms, but have made a concerted effort to find more appropriate and easier-to-guess Latvian words and expressions. After all, what is the point of producing a Latvian version if you are only adding a Latvian ending to the English word?

To enter Latvian letters with all the garumzīmes and mīkstinājumi (also referred to as diacritics) you need to hold down the right ALT key while pressing the appropriate letter. Hit ALT and “a” to get ā, ALT SHIFT s to get Š and so on. It is interesting to note that under this arrangement the controversial palatalised r or ŗ is supported, but o-macron or ō is not. Microsoft’s implementation of the Latvian keyboard driver, also referred to as “Latviešu (QWERTY),” isn’t as convenient as the ~ or ’ dead-key approach used widely in Latvia (with the WinLogs, WinLat and Birojs Latvian software writing packages). Microsoft has decided to stick to its own universal standard for entering foreign language characters.

In terms of proofing tools, MS Office 2007 includes only the Latvian spellchecker and hyphenator modules, both of which have also been licensed from Tilde. If this is not enough and you need the multiple language dictionaries (Latvian-English, Latvian-German, Latvian-Russian, Latvian-Latvian), thesaurus, grammar-checking and a bunch of additional fonts for the Baltic languages as well, you’ll definitely want to look at the separate add-on package called Birojs 2005.

The Latvian localised versions of MS Vista and MS Office 2007 are available for purchase only in Latvia and are at the same price as the regular English versions. Although the software products have been available now for several months there hasn’t been any active marketing and they are yet to appear on store shelves of the leading computer stores. When I recently inquired both at Elkor and Technoland in Rīga I received only blank stares and the salespeople directed me to the English versions on display. Price can normally be a decider and definitely helps the spread the word, so Microsoft could possibly do well to consider discounting the Latvian version as it has with previous versions.

For those who already have invested in the English version of Office 2007 and want to give the Latvian interface a go, then for around USD 25 you can download the Microsoft Office 2007 Language Pack for Latvian. Similar packages are also available for Estonian and Lithuanian. The Windows Vista Language Pack that allows you to latvianise your English version of Windows Vista is not yet available, but is expected to be downloadable by the end of the year. 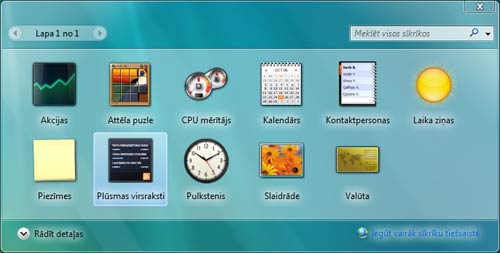 Everything in Windows Vista, even the Windows gadgets or sīkrīki, has been Latvianized.

2 thoughts on “Six years on and Microsoft goes fully Latvian”