The folk ensemble Laiksne has released a new compact disc called Putra. It is the group’s fourth album.

The recording includes rarely heard work songs and tunes performed during social gatherings. The songs are from around Latvia, while one (“Lai iedzeram!”) is from a Latvian colony in Siberia.

Also appearing on the album are Gatis Gaujenieks on voice, bass, ģīga, mandolin, domra (a Russian string instrument) and mouth harp, as well as Matīss Biezatis on voice.

Tracks on the compact disc include:

The last track, “Kā mēs putru vārījām,” is just a series of outtakes from the recording session and really was not necessary. 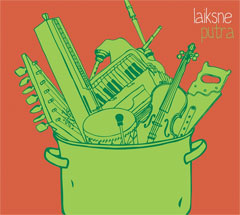