Kalamazoo, with a population of approximately 77,000, is located in the southwest corner of Michigan. It sits about halfway between Detroit and Chicago. The city is home to three institutions of higher education: Western Michigan University, a nationally recognized research institution; Kalamazoo College, a small highly rated liberal arts college; and a large community college.

Despite its relatively small size, Kalamazoo is also home to several billion dollar industries, among them Pfizer Pharmaceuticals and the Stryker Corp. It has two major hospitals, several museums and numerous cultural activities to keep the populace entertained year round. In 2006 a group of local philanthropists and businessmen created and funded a unique organization called The Kalamazoo Promise, which received national attention and triggered a lively educational debate and even inspired similar programs across the country. The organization has promised and committed to pay for a four-year college education at any state college or university for all Kalamazoo School District students who graduate high school.

To understand Latvian culture and life in Michigan, one must first look back in history and understand how Latvians came to settle in the state. During World War II, thousands of people fled their homelands in Eastern Europe hoping to escape the impending communist takeover. They packed what they could carry and fled by boat or land to safer areas, some to Sweden but most to Germany where they eventually settled in Displaced Persons camps administered by the United Nations. The United Nations Relief and Rehabilitation Administration provided humanitarian assistance in these vast camps that were scattered throughout western Germany. Latvians and others living in these camps quickly established self-government which, in turn, ran schools, medical facilities, churches, and numerous cultural organizations. In the late 1940s the United Nations established the International Refugee Organization, the purpose of which was to resettle and find employment for the millions of war refugees. Some remained in Europe but most migrated to countries throughout the world, including America.

In the late 1940s and early 1950s, Michigan had a strong agricultural base and also experienced strong industrial growth, especially in the automobile manufacturing. Many church organizations and individuals were happy to offer new homes and to help find work for the needy refugees. Farms, factories and other businesses welcomed the inexpensive but hard-working labor force. During this period, more than 5,000 Latvians found their way to Michigan. Latvians were drawn to Kalamazoo thanks largely to the efforts of the Rev. Jānis Laupmanis, a Latvian minister who had settled in Kalamazoo in the late 1930s. He had kept in contact with friends and acquaintances in Valka, one of the displaced persons camps in Germany, and was responsible for attracting many Latvians to the area. Laupmanis sought out local churches, organizations, and individuals and persuaded them to sponsor Latvians. One of the many to take advantage of this newly formed network and move to Kalamazoo with his family was Arnolds Kalnajs, founder of the Valka choir, Dziesmu vairogs (Shield of Songs). Thus began a succession of choir members, extended families and friends finding sponsors and jobs in Kalamazoo and Grand Rapids, which is about 50 miles north of Kalamazoo.

Maintaining the Latvian language and culture were of primary importance, thus in the early 1950s numerous cultural, religious, educational and social organizations were founded such as churches, associations, choirs, scouts, schools, children’s camps, folk dancing groups, and literary, art and theatre groups. The main goal was to keep the language alive and to instill in the children a knowledge and appreciation of the Latvian culture.

The majority of Latvian refugees were highly educated with a strong work ethic. They sought to instill in their children an appreciation of the value of education and hard work. In the 1950s it was not uncommon for both parents to work two or three jobs. The grandparents would be left to tend to the children. Because of the high value placed on education many Latvian immigrants entered Michigan’s colleges (Wayne State University, Michigan State University, University of Michigan or Western Michigan University) in an effort to re-educate themselves and adapt to their new lives. The highest priority was to provide a college education for their children. It was almost unheard of for a Latvian child not to enter college upon graduating from high school. Many earned advanced degrees.

In 1967, Valdis Muižnieks and Lalita Muižnieks established a Latvian program at Western Michigan University in Kalamazoo where students could acquire a minor in the language. Also, the Latvian Student Center was built to house those enrolled in the programs. It contained an extensive library and a cultural center. The program was phased out in 1994.

To maintain the language, in the early 1950s a Latvian school was founded and it is still functioning today. The school, over the years, has been housed in rented space in local public schools, in the church social house on Rose Street and now in the Kalamazoo Latvian Hall on Cherry Hill Drive. For many years the school was held on Saturday mornings but now instruction is given on Sunday mornings. Parents and interested individuals are the teachers and they follow educational guidelines and standards set by the American Latvian Association. One should also mention that Latvian Center Gaŗezers is located about 30 miles south of Kalamazoo near Three Rivers. Most children from Kalamazoo have attended the summer camp and the high school. Many individuals from Kalamazoo are active in working, preserving and supporting Gaŗezers.

In December 1949, the St. John Latvian Lutheran Church was founded. It was served by the Rev. Jānis Turks until his retirement in 1992. The Kalamazoo Latvian Church was established in August 1950. The Rev. Kristaps Hermanis briefly served as pastor, but the Rev. Arturs Piebalgs took over in 1951 and continued until his retirement in 1985. In the beginning, each congregation held services at rented local churches. In 1961 the St. John congregation built its own structure on Cherry Hill Drive. Soon after the Kalamazoo Latvian congregation purchased its own church on Portage Street. In 1995, the congregations merged and became the Latvian Evangelical Lutheran United Church. Services are held in the Cherry Hill Drive church. The Rev. Leons Vīksne was minister until his retirement in 2003 and was succeeded by the Rev. Biruta Puiķe, who received her education in Latvia. The congregation is very active and still organizes various events.

On June 30, 1950, the Kalamazoo Latvian Association (Kalamazū Latviešu Biedrība) was established and a social hall was purchased. It was the center for all cultural events. In 1987 a larger, two-story social center was built next to the church on Cherry Hill Drive. The first building was sold and the present social center is now the focal point for all activities. It houses the school; hosts many weddings, commemorative gatherings and meetings, and is also rented out to the larger local community. In 1956 the Kalamazoo chapter of Daugavas Vanagi was founded and is still very active today offering relief to charities in Latvia. In 1956, Girl Scout and Boy Scout chapters were established and remained very active until the 1990s. In 1964 the Latvian Credit Union was founded and is still active today. A literary group also exists in Kalamazoo. Dace Copeland, former head of the American Latvian Association, sells books and recordings especially related to education. Vilis Miķelsons is a correspondent for the Latvian newspaper LAIKS, as was Auseklis Zaļinskis before his death.

Of the cultural groups, the most prominent and important have been the choirs. As mentioned, one of the major unifying forces for the establishment of the Latvian community was the choir Dziesmu Vairogs. After its leader Kalnajs died in 1975, the choir slowly disbanded. However, a men’s choir led by Roberts Zuika and Monika Dauksts, and a women’s choir led by Jānis Zuika, continued singing. Later a separate choir was founded and directed by Copeland. For many years, a source of great pride and entertainment was another small men’s choir, Piltenes Prāģeri, led by Richards Rollis. The group sang folk songs and other material and even recorded several tapes of its work.  No discussion of music would be complete without the mention of Pēteris Lielzuika who, over the years and still occasionally today, has graced countless events with his beautiful tenor voice.

A folk dancing group in the Kalamazoo community has been led by a succession of individuals. From time to time the group becomes inactive but it is soon revived by younger, energetic individuals. They organize presentations for various social functions and participate in the national song festivals held every four years.

In this brief overview one can see that the Latvians in Kalamazoo were a thriving, active community for many years. Their numbers have dwindled and because of the advancing age of its members there are fewer cultural events than in the 1950s. But always, it seems, younger individuals rise up to take the reins and continue working to preserve the cultural heritage of Latvia. For example, a committee was formed in the fall of 2006 to organize a New Year’s celebration Kalamazoo Latvian Hall with a rap singer, a large specially painted mural of Old Rīga, ethnic food and lively entertainment. Because of the pleasant environment Kalamazoo has to offer, combined with the existing and well-established Latvian community, new families have chosen to make their homes in the area ensuring that the Latvian community should thrive for many years to come.

(Editor’s note: This article is based in part on the author’s book, Latvians in Michigan, published in 2005 by the Michigan State University Press.) 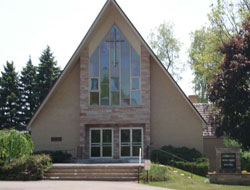 The Latvian Evangelical Lutheran United Church, on Cherry Hill Drive in Kalamazoo, was built in 1961. (Photo by Silvija Meija)