Two paintings by Latvian-American artist Ludolfs Liberts, each valued at about USD 10,000, have been donated by his granddaughter to a new fine arts center opening soon at East Central University in Oklahoma.

The paintings will become part of an exhibit in the new Hallie Brown Ford Fine Arts Center, according to a press release from the university in Ada, Okla.

The paintings—one depicting a scene in Germany and the other apparently Venice, Italy—are a gift to East Central from Melita Long, who works on campus for Chartwell’s Dining Service.

“They were just sitting in my house, so I talked to my mom before I did this and went from there. She was all for it,” Long said in the press release. Long’s mother is Jana Mitchell, a resident of Altus, Okla.

The prolific Liberts was born in 1895 in Latvia and died 1959 in New York. He was especially known for his landscapes and cityscapes, but also did set and costume design, according to the press release. He was married to opera singer Amanda Liberts Rebane. The couple, with their daughter Jana, fled Latvia during World War II to Austria and Germany. In 1950, they moved to New York, where Liberts continued to paint and taught at New York City College.

“Ludolfs Liberts was one of the 20th century’s most notable Latvian artists and influenced mightily our art culture,” Guna S. Mundheim, president of the American Latvian Artists Association, told Latvians Online in an e-mail. “We can be happy that his grandchildren have donated two of his works to East Central University in Oklahoma, where by virtue of being at an educational institution they will continue to speak to future generations about our culture in an international context.”

Long never met her grandfather, according to the press release, but she searched the Internet for background.

“He’s more popular than I thought,” Long said. “He was very talented and very well known.”

“If I hadn’t had the experience before of bumping into people who had a good painting, I would have been more surprised,” he said in the press release. “It’s funny how life takes you on a certain journey and you end up in a certain place. I think it’s great Melita did this.”

Liberts’ work is found in public and private collections in Europe and the U.S., including the Latvian National Museum of Art (Latvijas Nacionālais mākslas muzejs), to which most of his collection was sent after his death. Jana Mitchell and her late husband, Charles W. Mitchell, donated one of her father’s paintings to the Oklahoma City Museum of Art in the 1950s. The painting is titled “Moulin Rouge, Paris – At Night,” Leslie A. Spears, the museum’s communication manager, said in an e-mail. 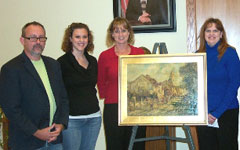 Melita Long (right) shows off one of two paintings by Ludolfs Liberts that she has donated to East Central University in Oklahoma. Also participating in the presentation were (from left) Brad Jessop, chair of ECU’s Department of Art; and Long’s niece and sister, Kyra Spradling and Mary Spradling. Long and Mary Spradling are granddaughters of the famous painter. (Photo courtesy of East Central University)