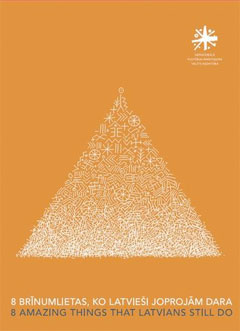 Latvians have some unique skills that have been handed down from one generation to the next. These are worth highlighting and feeling proud of, as revealed in the DVD 8 brīnumlietas, ko latvieši joprojām dara (8 Amazing Things That Latvians Still Do), which can serve as an indirect ambassador of these crafts and skills to the rest of the world.

The publisher of the DVD, the State Agency of Intangible Cultural Heritage (Nemateriālā kultūras mantojuma valsts aģentūra), has been tasked with promoting Latvian cultural heritage within Latvia for many years now. The government body has been responsible for the world-renowned and spectacular song festivals. One of the more recent campaigns has been a two-month long event in March and April called “Tradicionālo prasmju skola 2010” (Traditional Skills School 2010), where artisans from various regions of Latvia opened their doors to anyone interested to teach their traditional folk skills .

The DVD is also part of this campaign. As the artisans’ commentary also has English subtitles the DVD lends itself to various audiences. Not only can it be used in Latvia but it can also be viewed by tourists and anyone interested in Latvian cultural heritage. The quality of the subtitles is excellent—always a good indicator of professionalism.

The DVD is also a marvelous educational resource for those learning about Latvia and its heritage. Latvian folklore lessons can be supplemented with this DVD, with discussion after the viewing an integral part of the lesson. Imagine the conversation you could end up having with a group of pre-pubescent youths of Latvian descent in your part of the world after they have watched this DVD. After the standard whys and wherefores that can be expected from an audience of this age group, you may well end up discussing the meaning behind traditional Latvian beliefs, the health benefits of home-baked bread or simply the reason why ancient Latvians had so much time on their hands to spend weeks weaving shawls and knitting complex mittens.

What, then, are these so-called “amazing” things? They include odd assortment of skills and crafts: the art of making wood carvings from single pieces of wood, ancient folk musical instruments, mobiles made of straw, the baking of bread the traditional way, knitting of mittens in Rucava, lamprey fishing, the weaving of woolen shawls in Piebalga and the weaving of cord shoes in Latgale. They are all skills requiring detailed instruction by an artisan, followed by hours of practice and loads of patience.

The DVD is not only a look into some quaint skills of days gone by, but also an audio-visual “how-to” manual. The second part of each film clip features the artisans talking through the steps and giving advice on how to make the items in question. For instance, one of the knitters from Rucava, Mirdza Ārenta, explains in detail how to knit mittens with the specific patterns associated with the region. Expert puzuri-maker Ausma Spalviņa shares her philosophy on the ancient ornaments that also served as protective charms, similar to the dreamcatchers of the American Indians. The lamprey fisherman, Aleksandrs Rozenšteins, goes through the process of grilling lamprey in a wood-burning oven. It’s heartening to know that each of these tautas daiļamatmeistari (experts in folk crafts) can now reach a much wider audience via this DVD.

The overall pace of this DVD is very relaxed and friendly. The interviewees feel so comfortable, leaving the impression they are sharing their knowledge and world-view with an old friend. They appear to have all the time in the world to slowly talk about their “hobby,” which is more than just a hobby. For some it’s just a way of life, complete with the philosophy that goes with it. This makes one think about priorities, values and the old saying, “The simple things in life are often the best.” A big thank you to Vides Filmu Studija for filming such a simple yet educational DVD. Our 21st century world-view needs a bit of adjustment and seeing these artisans in their home environment certainly makes one wonder if they still have a sense of something that we have long forgotten.

Notes: In Latvian with English subtitles.