Latvian pop singer Žoržs Siksna has, for decades now, been one of the most recognizable vocalists in Latvian popular music. Many of the songs he has sung have been hits and remain well known and are beloved songs even decades later. Though most of his more popular tunes were recorded in the early 1980s, he has remained active, performing and recording, and also enjoyed a resurgence of interest in his music after his appearances on the Latvian talent show Koru kari. To acknowledge his contribution to Latvian popular music, in 2017, record label MicRec released Leģendas, a collection of his best known numbers.

This collection is particularly welcome, since Siksna has had comparatively fewer releases on CD than other singers of that era. One best-of collection, Vasaras vīns, was released in 1995, but also included some newer songs and missed quite a few of his more well-known songs. The Leģendas release (the latest in a series that celebrates Latvian popular singers) is a long awaited, extensive collection that serves as a convincing reminder of Siksna’s singing ability and talents. The album also includes quite a few songs that were previously unreleased on CD.

Among Siksna’s most popular songs is ‘Muļķe sirds’ (composed by Raimonds Pauls), an anxious lament for a foolish heart – though it should be noted that the version on this CD is not the same version as was on the Mikrofons 81 record, which is a slightly slower, more relaxed version of the song. The song was also featured in one of the most popular films in Latvian history – Limuzīns Jāņu nakts krāsā, released in 1981 and directed by Jānis Streičs. The film also includes the dreamy ‘Vālodzīte’, a song Siksna also later included in his repertoire, and Siksna’s version of this song also features the singer playing the clarinet.

Siksna, with his soaring voice and stage presence, has occasionally been described as a ‘Latvian Tom Jones’, and one can occasionally sense that in the mildly flirtatious ‘Genoveva’ and the slightly more amorous song ‘Jel, dod man bučiņ’’. In contrast to the slower and relaxed songs sung by many of his contemporaries, Siksna recorded quite a few up-tempo and energetic songs like ‘Sirdij nevajag skaitu’ and ‘Pasaulīte’.

Siksna also worked with many different composers. As with many artists of that era, most of the songs he recorded were composed by Raimonds Pauls, but this collection includes a number of tunes written by other composers, such as ‘Mātei’ (composed by Ivars Vīgners), ‘Negaidi mani velti’ (Andris Riekstiņš), and ‘Vasaras vakarā’ (Aleksandrs Kublinskis), among others.

Though certainly many of the songs can be considered lighthearted pop music, Siksna’s talents are still evident on some of the more serious numbers, like the sweepingly beautiful ‘Ugunsputns’ or the melancholy and wistful ‘Smeldzošais septembris’. Siksna’s singing prowess elevates these songs – taking what otherwise might be ‘ordinary’ pop songs and turning them into something far more memorable and artistic.

The CD booklet includes a brief biography of the composer by musicologist Daiga Mazvērsīte (in Latvian), as well as a few photographs.

This collection of songs by Žoržs Siksna is yet another worthy entry in the impressive Leģendas series, reaffirming the talents and exceptional vocal ability of the singer. With more than forty years’ experience in performing, he has achieved iconic status in Latvian popular music. This collection is a testament to Siksna’s talents and memorable performances. 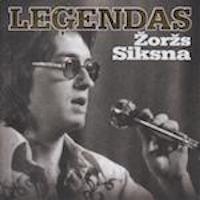